Intended to “reduce the incidence of crime in Nunavut” 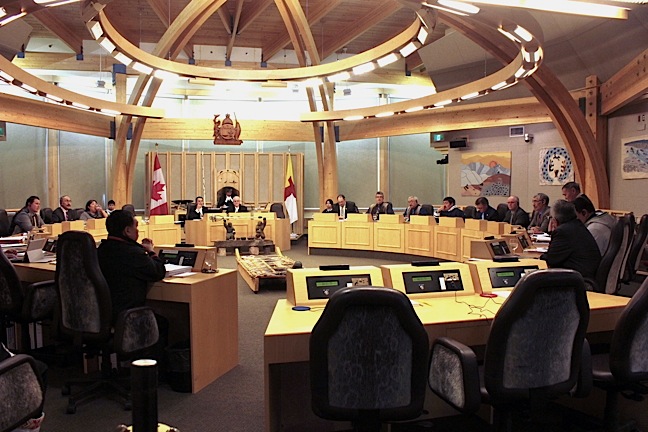 Nunavut has a new five-year strategy aimed at preventing crime and reducing Nunavut’s rates of family violence and victimization by violent crimes and household crimes, which remain the highest in Canada.

Tabled, without fanfare, on March 14, the last day of the recent legislative sitting by Justice Minister Keith Peterson, the 47-page document says the new strategy is based on the “crime prevention through social development approach.”

This approach calls for measures to prevent crime along with “stakeholder action, government commitment, focus on community ownership, and client-centered interventions.”

In the document’s introduction, Peterson said the strategy will “help reduce the incidence of crime in Nunavut, and in so doing achieve our vision of strong and safe communities.”

The Government of Nunavut plans to back this up with an internal working group and money for a crime prevention fund.

The GN also plans to take a closer look at crime and communities, doing more research and building public awareness, to address the causes of crime and find out why people engage in criminal activities.

The strategy offers two case studies to show how its approach will play out.

Members of this community are “very concerned about youth and their needs,” the document says in one example given.

In this community you can see violence within families and child neglect. So, youth learn “unhealthy coping behaviours” from their environment.

And there is also a high flow of contraband and bootlegging that takes place in and around the community, the document goes on to say.

During a community engagement meeting to set crime prevention priorities, community members say youth commit a lot of mischief-oriented crimes—such as theft, break and enter, and vandalism—because they do not have a lot of activities and adult supervision is lacking.

Those at the meeting decide that their first action will aim to provide youth with more opportunities, and “this evolved into the decision to create a youth centre where youth can spend their time, with Elders present as much as possible to provide healthy support and mentorship.”

The crime prevention strategy flowed out of the community tour held between November 2013 and May 2014, followed by a public engagement report in November 2015.

Along with the strategy, another crime-fighting tool received assent March 14: Bill 19, the Unlawful Property Forfeiture Act.

This legislation is intended to undermine one of Nunavut’s most lucrative underground industries—the estimated $10-million-a-year market in bootlegging and the similarly valuable market for drugs.

Civil forfeiture would allow the GN to seize ill-gained property through a civil court order and use that property to help prevent illegal activities or to help victims of crime.