“There is currently no form of external oversight” 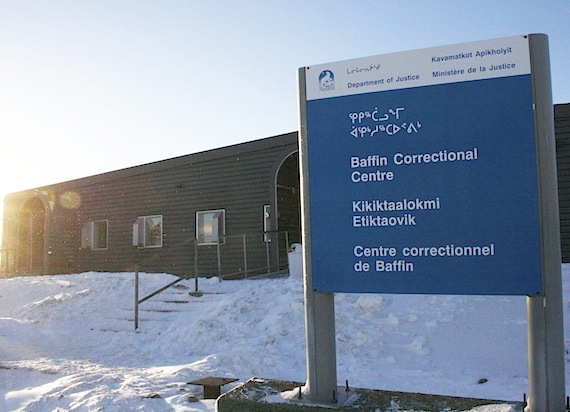 The Nunavut government admits that there’s no external agency or ombudsman to monitor Nunavut prisons for abuses of prisoners’ rights. It’s not clear if or how a new Corrections Act will fill this gap. (FILE PHOTO)

Nunavut’s justice department confirmed Jan. 29 that the rights of inmates housed inside the territory’s correctional facilities are not monitored by an external agency, such as an ombudsman.

That’s unlike almost every other Canadian jurisdiction.

And despite a current overhaul of Nunavut’s out-dated Corrections Act that’s now underway, department officials would not confirm if the revised act would include external oversight of prisoners’ rights.

“There is currently no form of external oversight [of prisoners’ rights in Nunavut], such as an ombudsman or commissioner. The department is working on a new Corrections Act that will have oversights,” an emailed correspondence from the department said Jan. 29.

When asked by Nunatsiaq News if those oversights will specifically include an external agency, a department media representative said “the specific form of those oversights is currently being considered internally.”

Prison staff confirmed that fresh air had been withheld as a result of an increase in contraband smuggling.

In fact, research shows that violating those rights — such as withholding fresh air from inmates — actually tends to increase contraband smuggling, the experts said.

He told Nunatsiaq News Jan. 29 that external oversight of prisons is crucial.

“There is no credible correctional system that I’m aware of that operates absent of some form of external oversight,” Sapers said.

Like other arms of the public service, correctional facilities involve large investments of public money and therefore need to be transparent and accountable, said Sapers.

But he added that, unlike other public services, prisons are inherently closed to the public’s view, operating behind “thick walls topped with razor wires.”

Yet prisons represent the ultimate expression of a state’s power, Sapers said. That’s because they are charged with depriving citizens of their liberty, he said.

“I can’t think of a public service where it would be more necessary to have external people looking into operations and shedding light into the dark corners of those operations,” the federal ombudsman said.

The Nunavut Court of Justice revealed one of those dark corners in the BCC recently.

In a decision released Jan. 29 Justice Paul Bychok sentenced a former BCC guard to 30 days in prison after that guard, Michael Bracken, was found guilty of assaulting a “cognitively impaired” inmate twice in the same incident.

Bychok described that incident as a “cowardly and gratuitous act of violence unleashed against a helpless victim.”

In coming to his decision Bychok said it was important to send a message to all Nunavummiut that the dignity of each individual must be kept intact.

“Our society’s values do not change behind a prison’s walls and those persons entrusted with authority must be the standard bearers of those values,” Bychok wrote.

If the values most important to society are not imparted on prisoners, there’s little chance of rehabilitating offenders before they are released back into their communities, Sapers said.

“There’s lots of research from around the world that leads to one single conclusion: that is, you cannot prepare prisoners for release in a harsh and bitter prison environment,” he said.

And if you want to gauge how a society treats those at its margins, a good place to look is in prisons, Sapers added.

Across Canada, the number of Aboriginal inmates has increased significantly and now accounts for 25 per cent of the federal inmate population, Sapers said —despite representing around four per cent of Canada’s overall population.

The incarceration rate of other groups historically on the margins of society — the mentally ill, those suffering from addiction, women and elderly — have also seen a significant increase in recent years, Sapers said.

And historically, change towards more humane treatment of prisoners has only come about in Canada after episodes of violence inside prisons, like riots, Sapers said.

That’s why Sapers said his role as an ombudsman is necessary and why it exists in every jurisdiction in Canada, outside of Nunavut and P.E.I.

It’s not clear what changes the Government of Nunavut has in store for the BCC. A new maximum-security correctional facility is slated for design in the 2016-17 budget, justice officials told Nunatsiaq News.

But when asked what changes to the BCC the department is considering to crack down on contraband without removing prisoners’ rights, the department representative referred only to remediation work completed in 2015.

The department also would not reveal any specific changes they are considering for the Corrections Act, nor did they provide a timeline of when those proposed changes will be made public.

Meanwhile, violations to the constitutional rights of inmates in Nunavut, particularly at the BCC, are not challenged in court as often as they are in the South, a veteran Nunavut defence lawyer told Nunatsiaq News.

That’s for a number of reasons, including a relative shortage of lawyers in Nunavut who are faced with “a flood of pressing violent crimes,” James Morton said.

Conditions are so bad at the BCC that Nunavut courts routinely give inmates enhanced credit for time served at the institution, Morton pointed out.

The conditions punish those on remand, who have not been convicted of a crime, and get in the way of rehabilitating those who have been sentenced, the lawyer said.

“The majority of inmates who come out of BCC are equally as angry [as when they went in], and perhaps better trained to commit crime,” Morton said.