“When an elder dies a library is lost. In Jonah’s case it is so very true” 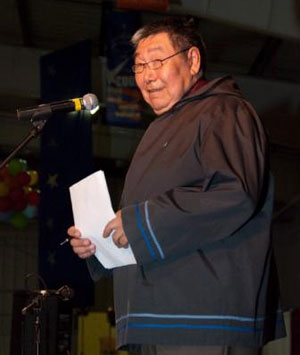 Jonah Kelly, 65, who died May 26 at an Ottawa hospital, emceed the 10th anniversary celebrations of the creation of Nunavut in 2009. (PHOTO COURTESY OF THE GOVERNMENT OF NUNAVUT)

In May 28 statements, Nunavut leaders sent their condolences to the family and friends of long-time CBC broadcaster Jonah Kelly of Iqaluit, 65, who died May 26 at the Ottawa General Hospital.

“It was with great sadness that I learned of the passing of Jonah Kelly this weekend,” said Nunavut Premier Eva Aariak. “Jonah’s time as a broadcaster with the Canadian Broadcasting Corporation is legendary. I was fortunate to work with Jonah at CBC many years ago and he was a tremendous resource to all of his colleagues. I learned so very much from Jonah’s remarkable experience and thoughtful insight.”

Aariak said Kelly would be especially remembered for his knowledge and contribution to Inuit Qaujimajatuqangit within the Government of Nunavut.

“He brought IQ to life for many employees with monthly activities and lessons. There is a saying: When an elder dies a library is lost. In Jonah’s case it is so very true,” Aariak said. On behalf of all Nunavummiut, our hearts, thoughts and condolences go out to Jonah’s wife, family and friends at this most difficult time. Nunavut has not only lost a highly respected elder, but also a friend to many.”

Kelly received many awards including a National Aboriginal Achievement Award, an honorary degree in journalism from Nunavut Arctic College and a lifetime achievement award from the Baffin Region Chamber of Commerce.

“Our thoughts are with the Kelly family at this very difficult time,” said Nunavut Tunngavik Inc.’s president Cathy Towtongie. “Jonah committed his time and energy to ensuring northern issues and our languages received equal coverage in news and programming. Inuktitut broadcasting is heard daily in homes in Nunavut because of the work of his generation.”

Kelly was the first radio reporter to cover the Northwest Territories’ legislative assembly in Inuktitut.

And Kelly’s signature “taima, tavva takkua” could be heard on radios across the North for more than 30 years, NTI noted.

“His working life was dedicated to ensuring that Inuktitut made the transition to a living on air language, and that events important to the Inuit community were part of broadcast media. He delivered community, national and international news in a colloquial form that was understood across most Inuktitut dialects, and provided a unifying force for Inuit. Southern broadcasters were told “the BBC has the “Queen‟s English,” and Inuktitut has the “Kelly Dialect,” the May 28 NTI statement said.

“Jonah was an orator in our language,” Towtongie said. “He could explain news and international events in ways that made sense to us, and could bring our community concerns and our Inuit culture to a broader Canadian audience. He played a critical role in connecting Nunavut communities and in promoting participation, understanding and knowledge for us.”