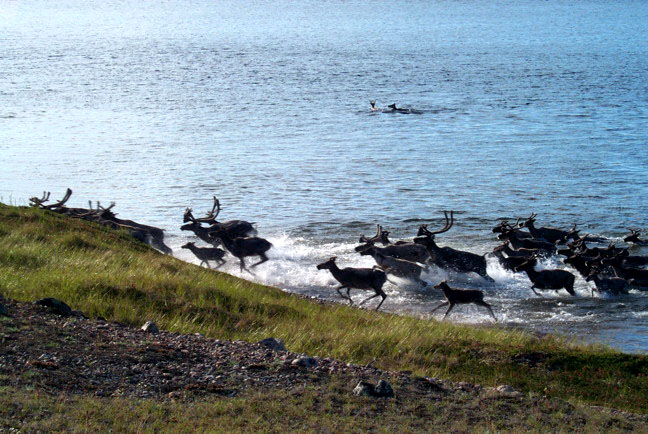 Nunavut’s Department of Environment wants to see limits placed on the sport hunting of caribou herds that are not already protected by harvest limits. (FILE PHOTO)

The Government of Nunavut wants new restrictions on sport hunting in the territory, and has proposed a new quota system for non-residents hunting caribou in herds not already protected by harvest limits.

In a presentation to the Nunavut Wildlife Management Board Dec. 5, the Department of Environment acknowledged the economic impact outfitting companies have in many communities, but said catering to the sport hunting industry must “not cause further declines of caribou populations and subsistence hunting.”

Under current legislation, any non-resident or non-resident foreign hunter can harvest two caribou per year from herds that do not have a total allowable harvest.

But there is no limit on the number of sport hunters who can visit Nunavut and harvest to that limit.

Unlike the Northwest Territories, which allocates sport-hunting tags by unit to the population of barren-ground caribou, Nunavut administers its herds separately.

There are six caribou herds in Nunavut that do not have a total allowable harvest and fall under the new sport-hunting restrictions, which are proposed as follows:

The territory withheld sport-hunting tag limits for the Coats Island caribou, pending a new survey of the herd’s health and population.

The NWMB has not yet issued a decision on the proposed sport-hunting quotas.

The proposed sport-hunting quotas were developed in consultation with affected hunting and trapping associations—with the exception of Rankin Inlet, which was not hosting meetings within the Department of Environment’s travel schedule.

The communities of Baker Lake and Kugluktuk were not in favour of imposing a caribou sports quota, while Arviat, Chesterfield Inlet, Coral Harbour, Naujaat, Whale Cove and Cambridge Bay approved the limits.

Hunting and trapping associations in Kugaaruk and Taloyoak were listed as being “unsure.”

Hunters in Gjoa Haven were in favour of a sport-hunting tag, but approved on the condition that the new tags would not lead to a global total allowable harvest being necessary.

The territory noted in its presentation that “processes have been started to establish [total allowable harvests] on some caribou herds that do not currently have them,” but did not specify which herds.

Nunavut’s proposed quota system comes on the heels of Nunavik announcing that it will phase out sport hunting of migratory caribou herds in northern Quebec by 2018.

That decision, announced at the beginning of 2017, followed a new population estimate placing Quebec’s Leaf herd at 199,000, down from an estimated 430,000 caribou surveyed in 2011.

In the eastern Arctic, a strict quota of 250 male caribou has been in place on Baffin Island since 2015, with herd populations across the island at record lows.

Hunters were unable to max out that modest quota in 2017, with only 233 caribou reported as harvested.

And the growing impact of social media in the Arctic has some wildlife officers concerned about online meat sales, which they view as an added strain on herds beyond subsistence hunting.