Peter Kritaqliluk, who chaired the Nunavut Implementation Training Committee, was “a strong advocate for Inuit” 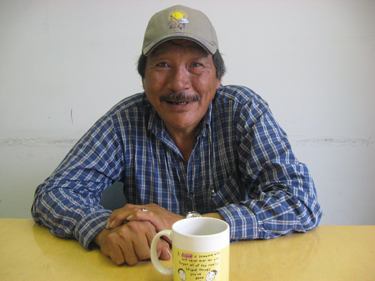 Peter Kritaqliluk, 60, a former mayor of Arviat and current chair of the Nunavut Implementation Training Committee, died Aug. 27 of cancer.

Justin Merritt worked with Kritaqliluk at the NITC, where Kritaqliluk served until his death.

“Peter was very well-spoken, a very professional chairperson and a strong advocate for Inuit,” Merritt said. “He believed they should be trained at all levels of government.”

“He has quite a history.”

Kritaqliluk worked for the Kivalliq Inuit Association in recent years as the organization’s secretary treasurer. He’s previously been a member of its board of directors, as well.

But Kitaqliluk’s history goes on: he was a founding member of the Beverly and Qamanirjuaq Caribou Management Board, he chaired the Nunavut Trust and worked as a negotiator for Nunavut’s land claims agreement.

Darren Flynn, a former senior administrative officer in Arviat, first met Kritaqliluk when he served as a hamlet councillor there. Kritaqliluk went on to serve two terms as mayor.

“Peter was always very much about the community,” Flynn said. “He was always thinking of what he could do for people.”

In his role as mayor, Kritaqliluk fought for funding to expand Arviat’s community hall, which remains the largest in Nunavut today.

Flynn said Kritaqliluk was a well-respected and well-liked person, both in and outside his community, which was reflected at his funeral service Tuesday, where many people got up to speak.

“No matter how busy he was, he was always a joker,” Flynn recalled. “He always made time for a smile, even on a bad day.”