“They won’t come back” 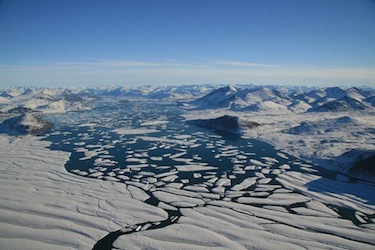 This photo shows the calving of the Ward Hunt Ice Shelf into Disraeli Fiord during August, 2008. (PHOTO COURTESY OF ARCTICNET)

Over the past six years, they’ve seen nearly half of these ancient ice shelves break off.

This summer saw the near-complete loss of the Serson ice shelf, as well as the splitting of the Ward Hunt ice shelf, the largest of the remaining ice shelves that have clung to Ellesmere Island for 3,000 to 5,000 years and contain the oldest sea ice in the northern hemisphere.

“This is our coastline changing,” Derek Mueller, a researcher at Carleton University, said in a Sept. 17 news release. “These unique and massive geographical features that we consider to be a part of the map of Canada are disappearing, and they won’t come back.”

Luke Copland, a researcher at the University of Ottawa, said oil companies should monitor the situation, as more icebergs will likely float down from the north, which could, in the future, threaten rigs in locations such as the Beaufort and Chukchi seas.

After taking stock of this summer’s changes based on satellite imagery, the two researchers noted ice shelves have declined “considerably” almost every summer since 2005.

This rapid loss will have permanent consequences, they say.

The ice shelves were formed and sustained in a different, colder climate, they say — and the disappearance of those ice shelves suggests a possible return to conditions “unseen in the Arctic for thousands of years.”

Old and thick Arctic ice shelves are relatively rare, being different than sea ice, which is typically less than a few metres thick and survives only several years.

Canada has the most extensive ice shelves in the Arctic, which are located along the northern coast of Ellesmere Island.

These floating ice masses are typically 40 metres thick, but can be as much as a 100 m thick.