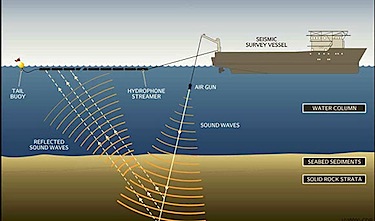 The National Energy Board should postpone any decisions on offshore seismic testing or oil and gas drilling in Baffin Bay and Davis Strait until after the federal government completes a strategic environmental assessment for the area, the Nunavut Marine Council said May 2 in a 13-page letter to the NEB.

“As expressed by several communities, the potential for seismic activity in Baffin Bay to have impacts on marine mammals represents a significant threat to subsistence harvesting and the traditional way of life of Inuit,” the marine council said in its 13-page letter.

The Aboriginal Affairs and Northern Development department began work this past February on such a strategic environmental assessment, with consultation meetings in 10 Baffin communities.

But the marine council said the NEB should put a hold on all related regulatory activities until after AAND finishes that assessment.

The marine council jumped into the seismic testing issue following an application, first made in May 2011, for permission to do extensive offshore seismic testing work, submitted by three related firms based in Oslo, Norway.

The three companies — TGS-NOPEC Geophysical Company, Multi Klient Invest and Petroleum GeoServices — are specialists in the use of ship-borne seismic equipment to gather data for sale to the oil and gas industry.

Their proposal, first submitted to the NEB in May 2011, sparked an outcry from many communities in the Baffin region, especially Clyde River and Pond Inlet.

“The proposed seismic testing and the resulting oil and gas drilling it would bring are not balanced development,” the Hamlet of Clyde River and the local hunters and trappers organization told the NEB in a May 2013 letter.

“It is utterly against the global movement to decrease global warming and to decrease our dependence on fossil fuels, including the never-ending activities that destroy the ecology of our planet,” the two organizations said.

At least seven Baffin communities, along with other Baffin organizations, oppose the project.

They complain that seismic testing proponents have not provided enough information about how the project might affect marine wildlife and how the company proposes to mitigate any damage.

At the same time, the Qikiqtani Inuit Association last fall called on the federal government do to a big environmental assessment that would look at the potential impact of offshore oil and gas work around the Baffin region.

That federal assessment is now underway.

The NIRB does not have jurisdiction over offshore seismic testing — because the boundary of the Nunavut land claim settlement ends at the 12-mile offshore limit.

But the review board said it has received copies of most of the correspondence related to the TGS seismic testing proposal.

And they and the other members of the Nunavut Marine Council say they acknowledge the “sensible public concerns” that people in Baffin communities have expressed.

“Given the fact that many of the marine mammals that may be affected by the proposed seismic survey migrate throughout Baffin Bay and across borders, it is crucial to conduct a Strategic Environmental Assessment to fully understand the impacts of seismic activities and oil and gas exploration and development, before such projects move forward,” the marine council said.

And the marine council also agrees that, right now, there isn’t enough environmental baseline information about Baffin Bay and Davis Strait with which to measure the extent of any future environmental damage.

The NEB suspended the TGS consortium’s application in July 2013, saying the proponent did not supply enough information.

The Norwegian companies re-submitted their proposal in September 2013, and the NEB review continued.

The marine council is a creature of Section 15.4.1 of the Nunavut Land Claims Agreement.