“There are a lot of indicators that gold will do well” 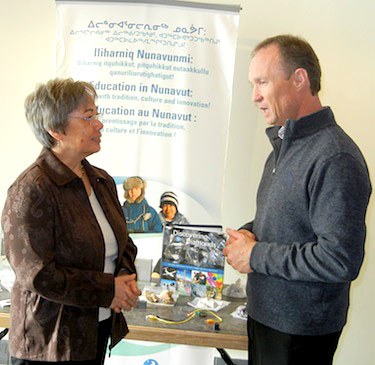 Sean Boyd, the president and CEO of Agnico-Eagle, with Nunavut premier Eva Aariak at the Nunavut Mining Symposium in Iqaluit this past April 10. (PHOTO BY SAMANTHA DAWSON) 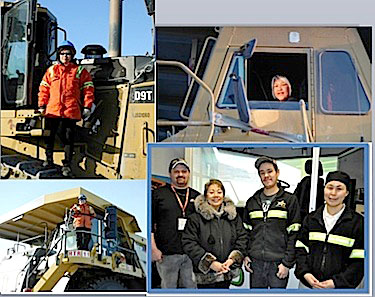 Agnico-Eagle used these images in a presentation at the Nunavut Mining Symposium this past April to illustrate how the company’s revamped training programs have reduced turnover within the Inuit workforce at the Meadowbank mine. (FILE IMAGE)

In the face of volatile gold prices, rising costs and falling profits, Agnico-Eagle Mines Ltd. still looks forward to a “building” period this year that will include about $90 million of spending this year on its Meliadine project near Rankin Inlet.

Agnico-Eagle’s financial statements for the first three months of 2013, released April 25, show the firm’s net earnings dropped to $23.9 million, compared with $78.5 million for the same period in 2012.

That’s due to lower gold prices and reduced production, especially at its Creston Mascota mine in Mexico, combined with higher costs.

But the company’s president and chief executive officer, Sean Boyd, said the company remains confident the price of gold will rise.

“We see strong central bank demand. We see weakening of mine supplies. There are a lot of indicators that gold will do well,” the firm’s president and CEO, Sean Boyd, told Nunatsiaq News.

This past April 15, after declining slowly for about a year, gold prices slid nine per cent in one day, to $1,321.35, its lowest level in two years. By the end of last week, the price had recovered to about $1,460 an ounce.

Boyd said his company sees the April 15 nose-dive as a one-time blip caused by a big speculative trade on the Comex gold market in New York and not an indication of future declines.

“We don’t view this as the end of the bull market in gold. We look at this as a correction. These types of corrections happen in gold markets,” he said.

To that end, the company will move ahead with two mine openings this year: the start-up of its La India mine in Mexico, and the re-opening of its Goldex mine in Quebec, which shut down in 2011 due to engineering problems.

As for the company’s much-anticipated Meliadine project near Rankin Inlet, Agnico-Eagle expects to spend about $90 million on exploration, permitting costs and infrastructure in 2013.

And around mid-2014, after looking at an updated feasibility study, Agnico-Eagle’s board will make a decision on when and how to construct a mine there.

This year, construction work continues on a 24-kilometre all-weather road between Rankin Inlet and the mine site, with completion expected this summer.

“Meliadine is a large deposit. It’s one that we like,” Boyd said. “For us it’s just good business to continue to do the work to understand what we have, to continue to drill it, to engineer the project. We’ll decide later next year when and how we should proceed.”

Should Agnico-Eagle make a decision next year to start construction at Meliadine, its mine, using a combination of underground and open pit techniques, would likely start producing gold in 2018.

As for Agnico-Eagle’s Meadowbank mine near Baker Lake, that operation set a record for the amount of ore processed through its mill: 11,320 tonnes per day, compared with 9,748 tonnes per day during the same period in 2012.

“They’ve really done an effective job of optimizing the mine plan and working hard on finding ways that they can lower the cost structure there. It is clearly a high-cost environment,” Boyd said.

Boyd also heaped praise on Meadowbank’s workers and said his company’s training efforts are paying off.

“That’s the entire workforce that contributes to that performance and 30 per cent or more of that workforce is Inuit. Local workers are advancing up through the ranks because they’ve really taken to the training program and they’ve learned and want to take on and acquire new skills.”

And Boyd said that women, who comprise about 30 per cent of the Inuit workforce, have embraced training, even in jobs that in the past have been traditionally done by men.

That includes 13 women who have been trained as haul truck drivers, a job that, as the employee gains more experience, can lead to wages of up to $34 an hour.

This means many Meadowbank workers will get a chance to work to work at Meliadine.