“Conditions are quite challenging in the mining industry” 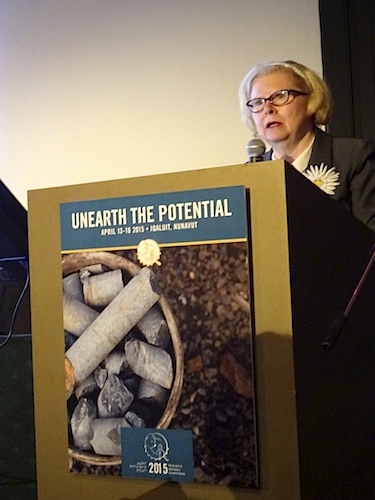 This graph — one of many which Scotiabank’s Patricia Mohr showed during her April 14 keynote speech to the Nunavut Mining Symposium, shows the year-to-year change of the main players in the global economy. (PHOTO BY JANE GEORGE)

Here’s a bleak forecast: this year’s going to be a tough one for the Nunavut mining industry.

That was gist of the message from the Scotiabank vice-president and commodity economist, Patricia Mohr, the keynote speaker April 14 at the Nunavut Mining Symposium, now underway in Iqaluit.

“Think and hope” were two words used by Mohr, who spoke in a less optimistic way than in 2013 when she told symposium delegates that the mining industry globally — and in Nunavut — could look ahead to better times by 2015.

“Conditions are quite challenging in the mining industry,” Mohr said at her April 14 talk to delegates meeting at the Frobisher Inn.

These conditions include poor economic growth worldwide, a slowdown in China, rock-bottom oil prices and increased competition in metal and iron ore markets.

And these have created challenges, such as low prices for gold, uranium, iron and base metals — copper, zinc, nickel and aluminium.

The price for iron is “extremely low,” Mohr said, which she acknowledged is “very important to Nunavut,” where Baffinland Iron Mines Corp. has recently started producing iron ore.

Four major low-cost iron producers in Western Australia and Brazil, who dominate the world iron ore market, embarked on a mine expansion program in 2013-14, she said.

This was partly to force out high-cost producers in other regions and keep their share of the market.

As a result, iron ore prices are expected to remain exceptionally low until these mine expansion programs are complete, she said.

Meanwhile, Rio Tinto’s mine in Western Australia can produce iron ore at a price as low as $17 US a tonne.

Her advice to people in Nunavut: do whatever you can do to assist this project.

Baffinland, which recently learned its amended Mary River project proposal does not conform to the North Baffin Regional Land Use Plan, also received financing from Scotiabank for the project, as Mohr disclosed during her update to the symposium in 2014.

Gold is also facing conditions which are “a little bit challenging,” Mohr said.

That’s due to a strong American dollar which is used to price gold. She’s forecasting a price of $1,185 US per ounce, which is lower than her prediction last year of gold at $1,375 US an ounce in 2015.

With the break-even production cost of $980 US an ounce, there’s still a positive margin for gold producers, “but it’s small,” she said.

This means gold producers will try to cut costs and defer capital expenditures — a strategy that Agnico Eagle appears to be adopting, according to recent comments to Nunatsiaq News.

Mohr said she sees brighter days ahead for gold, by 2017

As for base metals, she said:

• uranium will gain strength, but not until 2020, due to new nuclear reactor construction.

Speaking to the symposium in 2014, Mohr emphasized China’s relentless movement towards an industrialized and urbanized future as the major force behind the strong mining industry.

That influence now appears to have been blindsided by other factors.

China remains vital to global markets, Mohr said in her April 14 talk, but the country is now experiencing “soft growth” she told the symposium delegates.

Mohr was the first speaker at the three-day symposium which will feature a total of 81 speakers under the theme “unearth the potential.”

For the full agenda, you can look at the symposium schedule here.