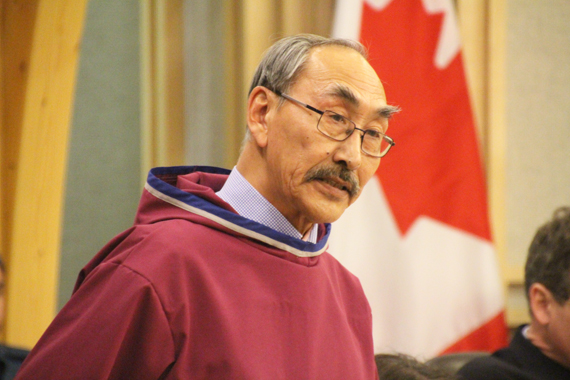 Minister of Education Paul Quassa Makes an appeal for support for Bill 37, proposed changes to the territory’s Education and Inuit Language Protections Acts, during the second last day of the spring sitting of the legislative assembly June 7. (PHOTO BY BETH BROWN)

Nunavut’s education minister stands by his vision of improving Inuit language and education through Bill 37, an act that amends the Inuit Language Protection Act and the 2008 Education Act—even though MLAs have said Nunavummiut don’t support that vision.

“Currently schools do not have the direction they need to effectively implement the bilingual education models,” Education Minister Paul Quassa said during a last-ditch—but impassioned—sales pitch at the Nunavut legislature June 7, which lasted nearly an hour.

Quassa said his statement came in response to Nunavut Commissioner Nellie Kusugak’s opening address at the start of the current legislature in 2015, in which she noted the government’s priorities: education, language and literacy.

MLAs decided May 4 and May 5, during closed meetings of a special standing committee, that they would recommend the bill not proceed due to an overwhelming lack of public support for the bill.

A collection of submissions made by leaders and members of the public to the committee were tabled earlier in the sitting and showed 39 of 40 letters did not support the bill.

Their main criticisms concerned changes to Inuit language rights, start-up delays for Inuktut education in Grade 4 through Grade 9 with no plans for high school Inuit language instruction and a lack of Inuit teachers in the school system.

“Nunavut’s bilingual education system is not ready for full roll out across all grades,” Quassa said in his statement. “We will be increasing the use of Inuktitut language as the language of instruction following the increase in number of Inuit teachers in the school system.”

Standard legislative process dictates that the bill cannot move forward until 120 days after its second reading, leaving the current government with only one more sitting in which to pass the bill before the fall election. If not, the bill would be dissolved with the change of government.

Regardless, Quassa used his statement to appeal to the assembly to reconsider the bill and to air publicly issues that he says have been “ignored” or misinterpreted in public discussion.

“We should be able to say to Nunavummiut that we made an effort at the legislature to improve the education act,” he said.

Quassa said that standardization and centralization suggested by the bill are needed to bring consistency to education in Nunavut, and to improve student outcomes in every community.

He noted that “standardization does not mean losing local dialects.”

He said the department recognizes that initial drafts of the bill did not balance the responsibilities between schools, district education authorities and the department, and that new drafts strike a better balance.

“This will improve how our system functions and does not inappropriately constrain local input,” Quassa said.

Granted, a change to introduce a council of DEAs has been publicly rejected by the current coalition of DEAs.

Inuit associations in Nunavut are against the bill although according to Quassa, the current draft of the bill includes changes stemming directly from Nunavut Tunngavik Inc.’s recommendations.

He added that since some NTI concerns with the bill are non-legislative, they can be addressed in future through continued partnerships.

Quassa flagged a few other points of the bill, which:

• will increase government accountability for bilingual and inclusive education;

• recognizes a commitment to the United Nations Convention on the Rights of a Child;

• extends the role of skilled Inuit cultural experts to include more than elders;

• assigns levels of language of instruction for each grade and field of study; and,

• assigns required instruction minutes for each area of study.

Quassa added that the much-anticipated Kindergarten to Grade 6 Inuktitut curriculum will be completed this year for use during the 2018-19 school year. And over the next three years, a guided reading program will be available up to Grade 7.

He added that western Nunavut would be slower to see use of Inuit language materials and programs.