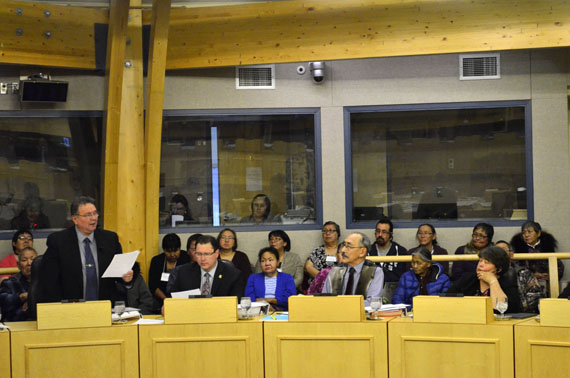 A promise Nunavut’s premier made early in his administration—to end social promotion in Nunavut’s schools—came back to haunt him Oct. 24.

Iqaluit-Sinaa MLA Paul Okalik repeatedly asked Premier Peter Taptuna to explain when he will end the practice of promoting students to the next grade, regardless of academic achievement.

“We are in the final year of our mandate and social promotion is still alive and well,” Okalik said in the legislature, citing promises made by the premier in 2013 that he would stop allowing it to happen.

Taptuna responded that there is no “overnight fix” to the problem and that the issue will have to be addressed “step by step” in the final months of his government and through hotly contested amendments to the territory’s Education Act.

“There are many things that we had planned on doing when we developed our Sivumut Abluqta mandate,” Taptuna said.

“There are many promises that were made in the past too, not just my promise of 2013, where we’re going to end these things that we will continue to try to get done throughout this mandate.”

In 2015, statistics compiled a data company called The 10 and 3 found Nunavut ranked lowest among Canadian jurisdictions for high school graduation at only 35 per cent.

Those rates are a blight on the national average of 85 per cent which places Canada overall above the Organization for Economic Co-operation and Development average of 84 per cent.

The OECD is a 34-country organization of states set up in 1961 to promote world trade and economic progress.

And figures released by Statistics Canada earlier this year show that only half of Nunavummiut aged 25 to 64 completed high school.

To make matter worse, only 11 or 12 per cent of adults in Nunavut, or about one in 10 who are aged 25 to 64, have good computer literacy skills, according to StatsCan.

But Taptuna maintained that many Nunavut students are receiving an education on par with other parts of the country.

“There are other students that move down south after living up in Nunavut for a number of years who have indicated that the education levels in Nunavut are just as good as what’s happening in other jurisdictions, both in languages and in academics,” he told Okalik.

That statement might come as a surprise to Nunavut district education authorities and Nunavut Tunngavik Inc., who have both been lobbying heavily for a more inclusive curriculum for students in the wake of proposed changes to the Education Act.

“The practice is going to end as soon as we get our Education Act in order,” Taptuna said.

Okalik pressed the premier that the territory’s Education Act was not a cure-all for social promotion, insisting that the issue is a policy matter for the government that lands at the premier’s feet.

“It raises false hopes and it is a nasty surprise for a lot of parents when they discover that their children have been promoted unfairly,” Okalik said.

Taptuna added that “social promotion can be interpreted in many ways,” but “we want our children to have the best possible education through an amended Education Act that is made for Nunavummiut.”