“While the family violence strategy is being polished, the most vulnerable of our residents continue to suffer” 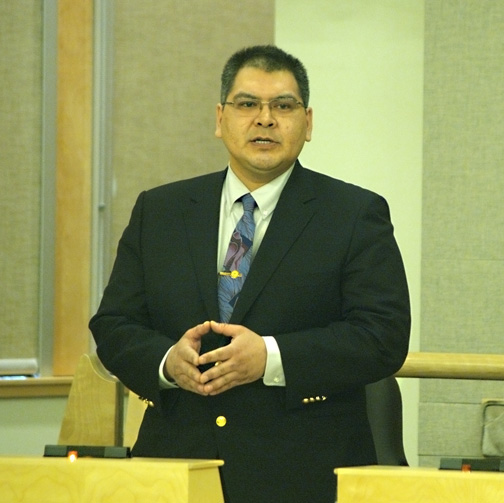 The fate of the Government of Nunavut’s promised Ilagiitsiarniq family violence strategy: that’s what Moses Aupaluktuq, the MLA for Baker Lake, wanted to learn more about Oct. 30 in the territorial legislature.

The plan for Nunavut’s family violence strategy was first announced in December 2010, with MLAs approving spending of $177,000 from the Department of Executive and Intergovernmental Affairs to the Department of Health and Social Services to complete the strategy.

During the Oct. 30 question period, Aupaluktuq asked Keith Peterson, the health and social services minister, about the status of the violence prevention strategy and when MLAs would see it.

Aupaluktuq wanted to know what changes were made to a previous version of the GN’s family violence strategy, and whether or not improvements have been made.

This past June, Peterson told MLAs he would bring a revised draft of the strategy to cabinet for review and approval, but Aupaluktuq said he hasn’t seen it yet.

Peterson said that’s because he wasn’t satisfied with the document.

“I reviewed the 100 pages of what I call [a] research document, of what is supposed to be an action plan, I didn’t think it was an action plan,” Peterson said.

“I’m not prepared to put something out there that can’t be backed up with action.

Peterson said he wants to see action against violence,” not another document that’s going to sit on the shelf gathering dust.”

“I want a document that actually will generate results,” Peterson said. “I look at the document I received and I’ve asked officials when they brought it forward to me ‘is this the best you can do’ and they keep telling me no it’s not.”

Peterson acknowledged that there are many factors that play a part in family violence and sexual abuse.

“There’s booze, there’s intergenerational trauma, you can name it. Having a strategy and an action plan is not going to solve our problems, it’ll help coordinate different groups,” such as governments and regional Inuit associations, he said.

But just because the government is still working on a plan doesn’t stop people from starting to take action, he said.

“Family violence starts at home. We’ve got to take steps at the community level to start addressing these issues,” Peterson said.

His advice to Nunavummiut: “look to yourselves first and then seek help.’”

Aupaluktuq agreed that violence prevention starts at home, but said that “it also starts [with] a governing body.”

“This government is cognizant of the fact that we just can’t roll out strategies and action plans and expect things to change overnight,” Peterson responded.

But Peterson said he doesn’t want to raise expectations to avoid “setting ourselves up for failure.”

“I can appreciate that the minister wants to make sure he gets it right the first time and it’s going to be a very extensive, very worthwhile cause to make sure we use this to ensure we are all protected,” Aupaluktuq said.

“[But] while the family violence strategy is being polished, the most vulnerable of our residents continue to suffer,” he said.

According to Statistics Canada’s figures, Nunavut’s family violence rates are 17 times higher than in the rest of Canada.

Aupaluktuq said he’s been asked by constituents to make it clear that family violence and sexual abuse are “completely unacceptable.”

And he said expects the government to implement strategies that will reduce violence in Nunavut communities. These cannot remain hidden issues: “we must confront violence and abuse in an open and honest way,” he said.

“Although the issues of family violence and sexual abuse are incredibly sensitive, I believe that we will not make any progress unless we stop being silent about them,” Aupaluktuq said.