“There is something in that school”

Aivilik MLA Patterk Netser wants the Government of Nunavut to replace Sakku School in Coral Harbour, which he, and many others in the community, say is making more than 300 students and staff sick. (FILE PHOTO) 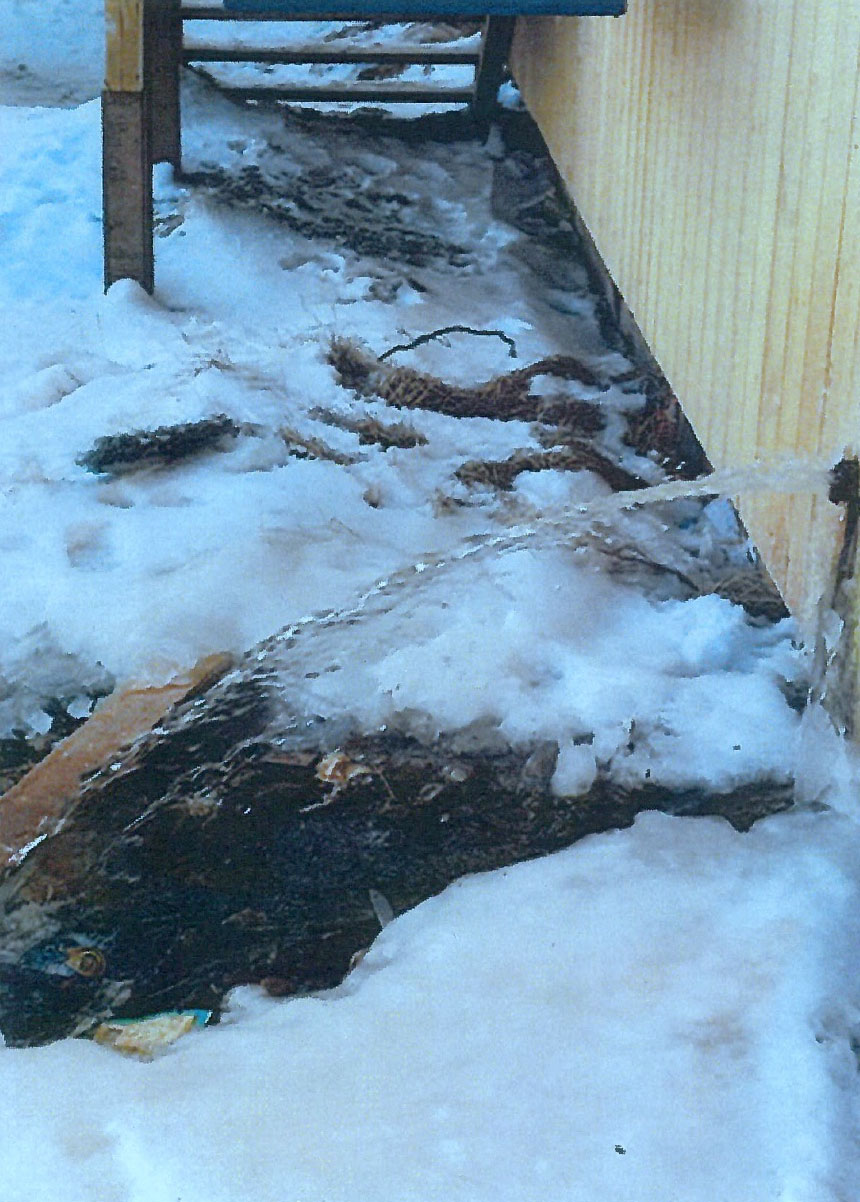 This photo tabled in the Nunavut legislature shows some of the mouldy and wet conditions at Sakku School in Coral Harbour.

Coral Harbour’s school is making many students and staff ill, says MLA Patterk Netser, who has been trying to get answers in the Nunavut legislature about what the territorial government plans to do about this.

Netser’s constituents in this community of about 800 want to see a new school built—and to that end, Netser tabled a petition, along with a series of photos showing mould in Sakku School and letters from parents on just how bad the school is for its 300 students.

“We’ve had a concern with a problem occurring in our school,” Netser said Monday in the Nunavut legislature. “Something is not right because the students have been catching impetigo, and the teachers and students have been getting headaches.

“I believe them. Every time I enter the school, by the time I walk out I have a headache. There is something in that school.”

Netser suggested that melting permafrost under the school means that water accumulates there.

“Some of us believe there is a bad odour coming from that area. It’s just going to be renovated. My constituents are very concerned about that,” he said.

Earlier this month, the local district educational authority closed the school for two days to protest the bad conditions.

For example, Coral Harbour parent Shawnie Nakoolak said she doesn’t want to send her daughter to school because she’s had recurring skin rashes, and Oleekie Sanertanut wrote how she is worried about her son in Grade 11 who has been sent home from school due to hives.

“He has been better with medication, but as a parent, I don’t want him to be medicated all the time to get his high school grade completed,” she said.

And then there’s Colton Ell in Grade 4: ever since he started attending Sakku School at age five he has developed red inflamed skin, with rough, scaly patches that ooze.

“They become very painful for him as well,” said his grandmother Rosie Tanuyak-Ell.

Mould can cause nasal stuffiness, throat irritation, coughing or wheezing, eye irritation, or, in some cases, skin irritation—no surprise to Benita Shapangak. She wrote about how her son Zach, who is in Grade 6 and has asthma, has now been diagnosed with pneumonia.

During Monday’s question period in the legislature, Netser said the school needs to be replaced, not retrofitted.

“I think we have a great case with climate change upon us that the unknowns underneath our school are exposing into the atmosphere of our school,” Netser said on Oct. 29.

An environmental assessment of the school has been completed, but Community and Government Services Minister Lorne Kusugak said the decision on whether to replace or renovate the school hadn’t been made yet.

Building a school would be a long and costly commitment from the GN, but a renovation could be completed by 2020.