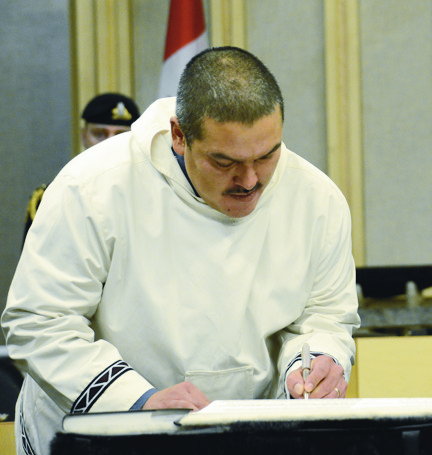 A scheduled first court appearance in Qikiqtarjuaq for Uqqummiut MLA Samuel Nuqingaq June 26 has been postponed because of weather.

The suspended MLA was supposed to appear on two criminal charges: one charge of assaulting another man, Tony Alan Aulaqiaq, and one charge of being unlawfully in a dwelling-house, relating to an incident alleged to have occurred Feb. 24 in Qikiqtarjuaq.

Nuqingaq’s first appearance has been adjourned until the next time the circuit court travels to Qikiqtarjuaq. Justice Andrew Mahar set that date for Oct. 29.

Nuqingaq is currently suspended, with pay, from the legislative assembly and its committees until July 16.

Premier Peter Taptuna said the program is for substance abuse.

This is the second time Nuqingaq has been suspended from the legislative assembly.

The assembly also suspended him for its entire winter sitting March 6.

And even before that, last November, Nuqingaq had his wages cut for a two-day absence from part of an orientation session for newly-elected MLAs held between Nov. 4 and Nov. 15.