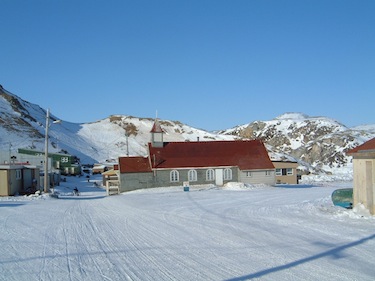 A view of Kimmirut, in an undated file photo. Pauloosie Padluq of Kimmirut, accused in a homicide dating to Sept. 2, 2014, entered a guilty plea to manslaughter Aug. 27. His case is scheduled to come back to court Sept. 22 to begin the sentencing process. (FILE PHOTO)

Pauloosie Padluq, of Kimmirut, pleaded guilty to manslaughter before Justice Bonnie Tulloch at the Nunavut Court of Justice in Iqaluit Aug. 27 in connection with a death in his home community on Sept. 2, 2014.

The identity of the victim appears to be protected by a publication ban ordered by a justice of the peace at Padluq’s Sept. 4, 2014 bail hearing.

Police had originally charged Padluq, 36, with second-degree murder in connection with the same death.

“What I’m going to do is enter a guilty plea to the lesser and included offence of manslaughter, do you understand that?” Tulloch asked Padluq, who appeared in an Iqaluit courtroom wearing standard-issued navy blue sweatpants and a sweatshirt from the Baffin Correctional Centre.

“Yes, I do,” Padluq answered in a soft voice.

But before that, the two lawyers will have to agree to a statement of facts.

Tulloch set Sept. 22 as Padluq’s next appearance in court, for facts and sentencing.

A future date for sentencing submissions will likely be set at that time.