Evidence ends with 15 hours of testimony from accused, Peter Kingwatsiak 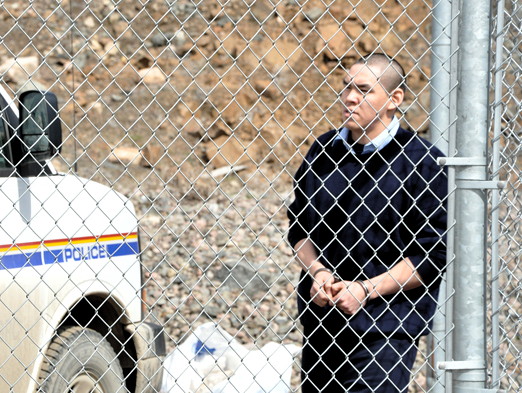 Accused killer Peter Kingwatsiak outside the Nunavut Court of Justice in Iqaluit June 26. The Cape Dorset man’s murder trial was adjourned June 26 until August when lawyers are expected to submit final arguments. (PHOTO BY THOMAS ROHNER)

Accused killer Peter Kingwatsiak finally left the witness box late on June 26 after giving about 15 hours of testimony that sometimes contradicted itself.

But Kingwatsiak, on trial for killing his step-brother Mappaluk Adla in Cape Dorset on Sept. 20, 2010, and slashing his uncle with a knife an hour before the Adla shooting, insists he blacked out and doesn’t remember the events because he had been sniffing gas.

Contraditions and memory lapses in a case such as this are common, expert witnesses told Justice Bonnie Tulloch, who presided over the five-day, judge-alone trial in Iqaluit. The mind has a tendency to “evolve” memory over time and “fill in gaps” during periods of blackout, they testified.

Kingwatsiak said he experienced such blackouts during both the shooting and stabbing incidents as a result of excessive gas sniffing in the hours leading up to the violence.

The trial was scheduled to wrap up June 26 and although all witnesses have testified, time ran out before lawyers were able to give their final arguments. The trial is now adjourned until Aug. 24.

Kingwatsiak’s ongoing problems with court translators added to the confusion of his testimony, which spanned three days.

For example, Morton asked Kingwatsiak what he remembered about getting into Adla’s home before shooting him.

“Do you have any memory of whether the door was locked or unlocked?” Morton asked him.

“I don’t remember, but I do know that the door was unlocked,” Kingwatsiak replied.

“You’re saying that because you got into the house, not because you remember if it was locked or unlocked?” Morton asked.

“What do you remember specifically of the shooting of Mappaluk?”

“I remember hearing a shot, and then leaving.”

“Do you remember actually putting the trigger?”

“I don’t remember pulling the trigger, but I do know that I pulled the trigger.”

Morton is trying to prove that Kingwatsiak didn’t plan the shooting and didn’t even want to kill Adla.

“Did you ever want to kill Mappaluk Adla?” Morton asked his client at the end of the trial.

Chaimowitz testified June 26 that he interviewed Kingwatsiak over three days in November 2012.

During those interviews Chaimowitz said Kingwatsiak admitted that Adla “on some level” deserved to die because of his habit of breaking up relationships by stealing other men’s girlfriends.

And Kingwatsiak’s “high risk” behaviour leading up to the shooting, including threatening to kill Adla and aiming a loaded rifle at Adla a day before killing him, could have led to a “conscious” killing of Adla.

But Kingwatsiak’s non-violent history, extreme emotional stress and “bizarre” behaviour on Sept. 20, 2010, seem to point more towards the impact of excessive gas sniffing, the psychiatrist said.

“The gas sniffing had a material difference on his state of mind that day,” Chaimowitz said.

In particular, when Kingwatsiak slashed his uncle in the face just a short while before shooting Adla, Kingwatsiak acted in a “bizarre and violent fashion” towards an uncle he had “a good relationship” with, Chaimowitz wrote in his report on Kingwatsiak, submitted to the court as an exhibit in the trial.

Cutting his uncle in the face “did not appear to make any sense,” Chaimowitz wrote, and speaks to the accused’s “disturbed state of mind” just before shooting Adla, making it unlikely Kingwatsiak knew what he was doing.

“The bizarre behaviour that Mr. Kingwatsiak exhibited when he attacked his uncle and his extraordinary use of sniffing gas while in a highly emotional state likely deprived him of sufficient cognitive ability to form intent,” Chaimowitz’s report says.

“That is not to say that he had not considered killing Mr. Adla, but it does appear that his actions that particular day… disinhibited him sufficiently to lead to this tragic outcome.”

After hearing final arguments, Tulloch will have to decide if Kingwatsiak is guilty of first-degree murder, second-degree murder, or manslaughter. The judge could also choose to acquit the accused.

First-degree murder, which is a homicide that is both deliberate and planned, carries an automatic sentence of life imprisonment without parole for 25 years.

Second-degree murder, which is a deliberate but unplanned killing, also carries an automatic life sentence but parole can be sought 10 years into that sentence.

Manslaughter, a homicide committed without the intention to cause death, has a minimum sentence of four years when a firearm is involved, as it is in this case, and a maximum sentence of life imprisonment.

Tulloch will also have to decide if Kingwatsiak broke into his uncle’s home Sept. 20, 2010, in order to commit an indictable offence — namely aggravated assault for cutting his uncle in the face.

Adla’s family, including his mother, sat in the gallery in large numbers throughout the entire week-long trial.