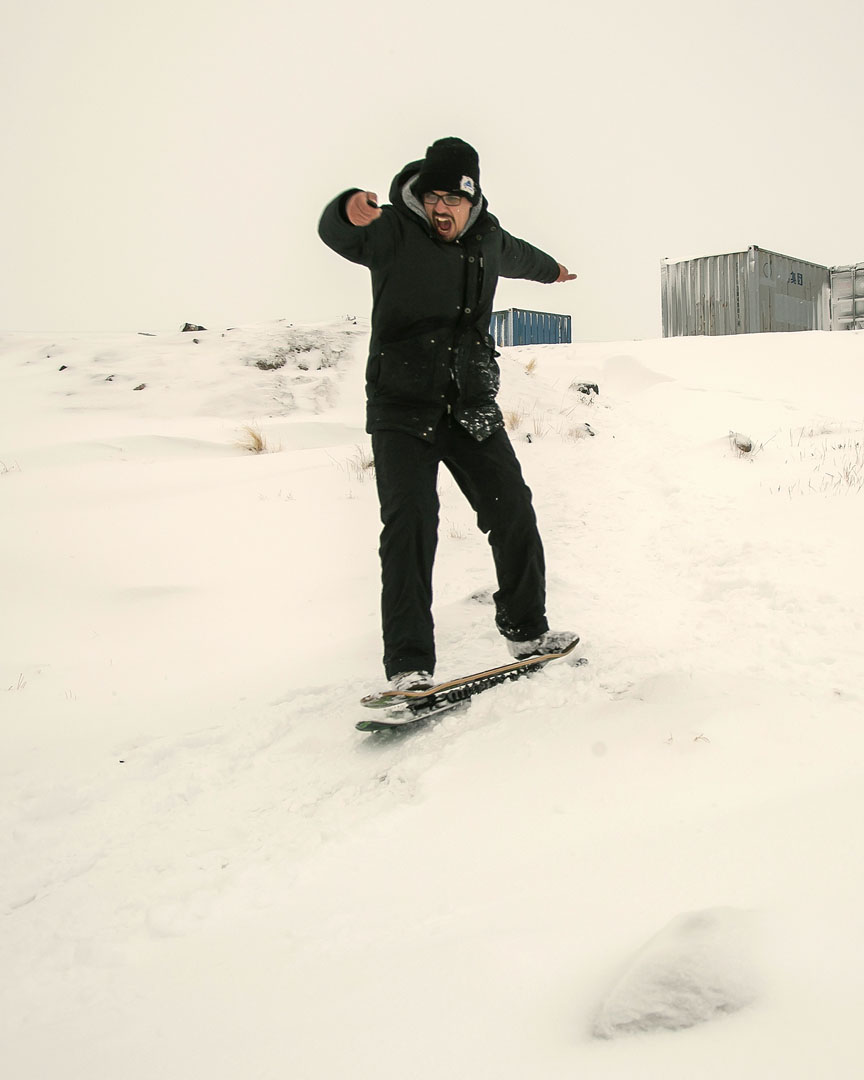 Jonathan Nuss takes a turn around Taloyoak on his snow skate. (PHOTO COURTESY OF JONATHAN NUSS)

There’s a new way to beat the winter blues in Taloyoak, thanks to newcomer Jonathan Nuss.

When the avid skateboarder moved to the western Nunavut community four months ago, he took up learning a new kind of boarding more suited to the North.

Never heard of it? Neither had we.

Part snowboard, part longboard, the snow skate has a grip material on top to keep your feet from slipping off the binding-less board, and a long runner—or skate—on the underside instead of wheels.

“It feels a lot like a skateboard,” Nuss said. But, there’s an upside to the winterized counterpart.

“If you fall in the snow it’s a lot less impact and a lot more fun than falling on concrete, that’s for sure,” he said.

And, with no bindings, mastering the board is all about balance and core exercise, he said.

Two weeks ago the 36-year-old photographer and videographer posted a YouTube video of his snow skatecapades around the community of Taloyoak.

In Toronto, Nuss was part of a group called Skate Invaders. The skateboard art collective puts on events to build community, reach out to youth and encourage physical activity.

Having also worked for Roarockit Skateboard Company making do-it-yourself skateboard kits for classrooms and STEM education models, Nuss decided to make his skate background useful for students in Taloyoak, by teaching a lesson on skateboards while supply teaching at Netsilik School.

Nuss shared a video of skater Parr Josephee of Cape Dorset with his Grade 7 class.

Nuss said the Taloyoak students were really inspired to see an Inuk youth from a Nunavut community skateboarding and graduating from an alternative high school.

“I like promoting physical activity outside, it’s a positive thing for people to do. It helps relieve stress, form friendships and build community among youth who are looking for new things to do,” he said.

That’s why Nuss lets youth in the community try out his snow skate.

“It’s something to do, something positive. They pick up on it really quickly,” he said.

“The visual learning of the children around here is amazing.”

But the sport—which has been picking up over the last few years in Canada—is also a form of self-care for Nuss.

He moved to Nunavut with his wife, Grade 5 teacher Morgan Bentham, during what soon became a challenging point in his life.

“It was my first time up North and my mom was really sick. Unfortunately, she just passed away as well and I was really far away from her,” he said. “I created this video to help me get through that time.”

While making the YouTube video was a way to cope with grief, the snow skate also helped him integrate into the town, he said.

“One way to become part of the community is just to go outside and be part of it,” Nuss said.

His video, titled, The Man Who Skated Taloyoak, shows him doing just that.

At just over three minutes, the video gives a crash tour of the sights and scenes in the community of just over 1,000 people.

“I wanted a way to show people down south our community,” and more specifically, to represent the Skate Invaders art collective in Taloyoak, he said.

“It’s really different, but it’s beautiful. This community is all about the people, and the children.”

If you’re looking to try your hand at snow skating, Nuss said he bought his Canadian-made board from Longboard Haven in Toronto, and the company is able to organize shipping north.

“It’s an exciting new sport,” he said. “Lots of Canadian skateboard companies started making them as a winter alternative, and it’s taking off.”