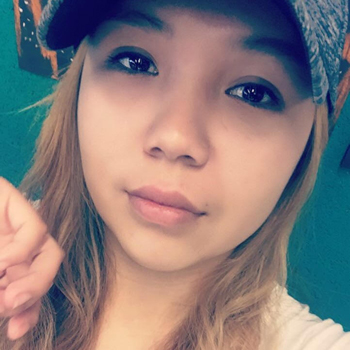 Julia George, 18, said she wanted to write about being Creenuk to let other mixed Cree-Inuit youth know that they’re not alone. (HANDOUT PHOTO) 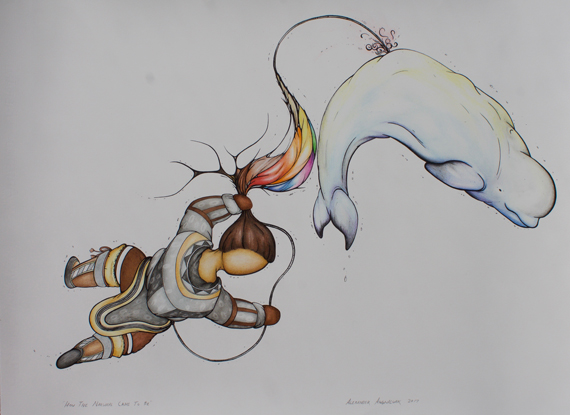 Alex Angnaluak’s How the Narwhal Came to Be, in pen and pencil on watercolour paper. The piece placed first in the Senior Art category of this year’s Indigenous Arts & Stories contest. (PHOTO COURTESY OF HISTORICA CANADA) 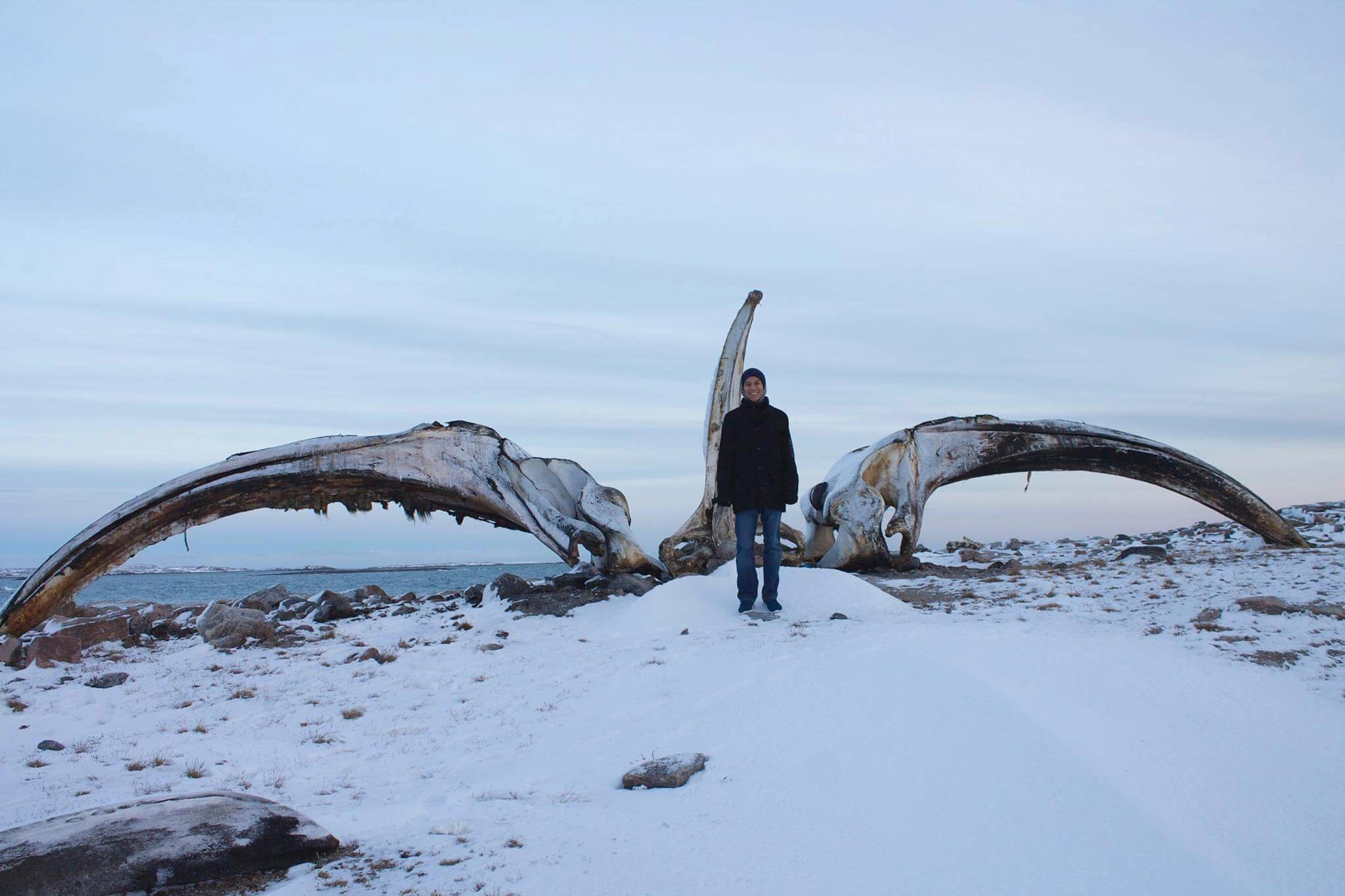 Alex Angnaluak stands in front of a bowhead whale jaw on a visit to Naujaat last year. (HANDOUT PHOTO)

When the Iqaluit-based artist found out his drawing placed first in Historica Canada’s Indigenous Arts & Stories contest, he threw his hands up in the air and shouted. His celebration wouldn’t have been so remarkable if he wasn’t at work at Iqaluit’s Unikkaarvik Visitor Centre at the time.

“My boss asked me: are you OK?” Angnaluak recalled, laughing. “But I was feeling pretty good.”

His winning piece, called “How the Narwhal Came to Be,” is a whimsical take on the Inuit legend, drawn out in pen and pencil on watercolour paper.

It was a story Angnaluak, 24, heard his father tell him growing up: a boy blinded by his own mother ties her to a harpoon. As she throws the harpoon out to catch a beluga, she goes with it, her hair tangling around the tool to become the whale’s tusk.

“Some people consider it a dark tale, but I always thought it was a very magical story,” he said. “I thought I’d cheer it up.”

Angnaluak grew up in Cold Lake, Alta., and later in his father’s hometown of Kugluktuk, before moving to Iqaluit last year.

He said he always enjoyed drawing but only started to take it seriously in recent years. This was the first time he entered a piece in a competition.

Now Angnaluak feels encouraged to explore the arts some more; he’s enrolled in an Introduction to Fine Arts program at Algonquin College starting this fall.

But accolades for Inuit don’t stop there.

This year’s Indigenous Arts & Story counted one other Inuit winner; Julia George of Kuujjuaraapik won first place in the Junior Writing category for her piece called “Being Creenuk.”

George, 18, grew up in the twin communities of Whapmagoostui and Kuujjuaraapik, with a Cree father and Inuk mother. Her story explores the complicated and sometimes painful experience of bridging the two cultures.

“I felt it was good to let everyone know how I felt because I’m not the only one,” George said. “And just to give people a better understanding of what it’s like to live up North.”

Though her parents started speaking to George and her siblings in each of their mother tongues, they worried it was confusing and opted just to communicate in English as a family.

In “Being Creenuk,” George describes her childhood attending a Cree school, where she was bullied for not speaking the language. When her parents transferred her to Asimauttaq school in Kuujjuaraapik, she said her classmates teased her and called her a Qallunaaq.

“We have felt rejected, insecure, isolated and ashamed,” George wrote in the story. “Ashamed of who we are.

George said one of her teachers encouraged her to write the piece. The 18-year-old just graduated from Asimauttaq school and plans to take a year off before applying to college in Montreal.

Both George and Angnaluak won a cash prize of $2,000 from Historica Canada for their entries. Both will be honoured at a Governor General’s awards ceremony in Ottawa in November.