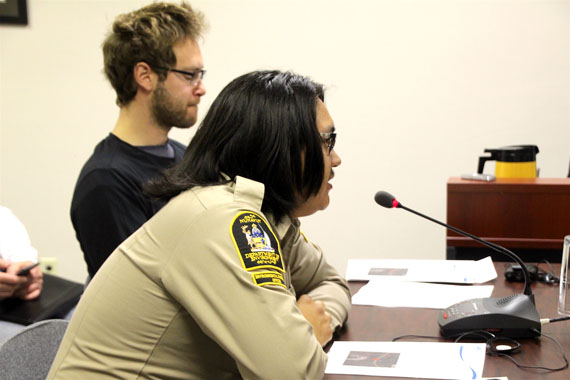 A trench containing what is left of a 2,400-litre fuel spill last February may have been flooded in June after a high tide, GN environmental protection officer Terry Milton said July 25 at an Iqaluit City Council meeting. (PHOTO BY BETH BROWN) 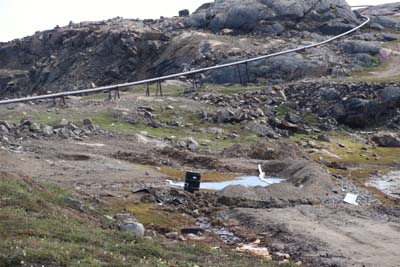 This berm was built to contain around 2,400 litres of fuel that spilled last February from a steel pipeline maintained by Uqsuq Corp., the company contracted by the Government of Nunavut to distribute fuel in Iqaluit. (PHOTO BY BETH BROWN)

A berm to keep diesel from spreading at the Iqaluit causeway is now higher than it used to be, after a high tide flooded the site in June.

The berm was built to contain around 2,400 litres of fuel that spilled Feb. 8 from a steel pipeline maintained by Uqsuq Corp., the company contracted by the Government of Nunavut to distribute fuel in Iqaluit.

“[Water] did reach the berm, but I didn’t notice it go over it,” Terry Milton, a GN environmental protection officer, told city councillors during a July 25 council meeting.

Milton has been monitoring the tides since a local fisherman, who claimed that his nets had fuel on them, issued a complaint.

“It’s still possible that it did go over the berm last month,” Milton said.

The bay has not been tested for oil, but tests done at the beach area between the berm and the water have shown no signs of fuel contamination.

The GN asked other residents for feedback on impact of the spill. No one else had a similar complaint.

“There’s a theory that what was seen by the citizen on his nets was a natural phenomenon,” said Alex Brisco, a GN environmental compliance manager, who also spoke at council July 26. “We asked him, if he sees it again, that he let us know so we could do samples on it.”

The cause of the spill is still being investigated, though Brisco said the spill could be connected to pipeline upgrades mandated by Environment Canada.

Before the spill, work had been done to ensure segments of the pipeline that run beneath the road were replaced with double layered steel walls.

Water that has collected inside the trench has been tested and is clean, but spill impacts still remain at the site and more remediation will take place in August, Milton said.

When asked, he could not confirm if the work would clear up contamination for good.

The GN has also been working with Indigenous and Northern Affairs Canada and Environment Canada to ensure the spill is contained properly.

“At this time we have no evidence of major impact to the area beyond the immediate vicinity of the spill,” Milton said.

Coun. Simon Nattaq said higher tides are sure to come in late summer, so an overflow could have taken place then if the berm were not built higher.