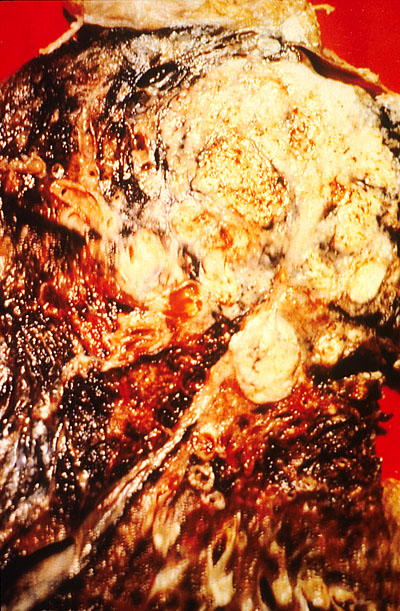 A cross-section of a human lung: The white area in the upper lobe is cancer. The black areas are discoloration due to smoking. (WIKIMEDIA COMMONS IMAGE)

A report from the Canadian Cancer Society released May 30 shows that when cancer strikes Nunavut residents, it kills at a higher rate than anywhere else in the country.

The numbers, based on data from Statistics Canada and other sources, show the incidence rate of cancer in Nunavut — 382 per 100,000 — is lower than in most other jurisdictions.

But despite that, the death rate from cancer in Nunavut, especially among women, soars high above cancer death rates reported in all other provinces and territories.

The big killers in Nunavut appear to be lung and colorectal cancers, for men and women alike.

And the report estimates that about 55 people — 30 men and 25 women — will die of cancer in Nunavut this year.

The Nunavut numbers, which show a middling incidence rate but a high death rate for cancer, are consistent with a study released May 13 on avoidable deaths.

That report, from the Canadian Institute for Health Information and Statistics Canada, shows Nunavut suffers the highest rate of avoidable deaths in Canada.

An Ellie Cansfield, a Rankin Inlet resident whose husband died of cancer, has criticized the Nunavut health department for failing to develop a cancer care and detection strategy.

This year’s report from the Canadian Cancer Society was designed to draw attention to liver cancer.

But the report gives no liver cancer statistics for Nunavut.