“Tobacco use is taxing the health and wealth of Nunavutmiut” 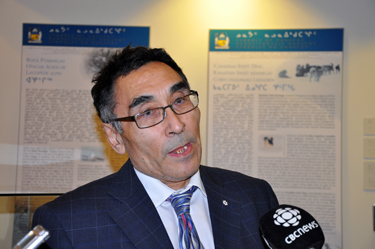 Health and Social Services Minister Tagak Curley says tobacco use is “taxing the health and wealth of Nunavutmiut.” The government’s new five-year tobacco action plan hopes to curb that. (PHOTO BY SARAH ROGERS)

Here’s a statistic that is hard to ignore: Nunavut has the highest rate of smoking in the country.

More than half of Nunavummiut smoke over 12 and many have become sick or have died prematurely as a result of tobacco use.

That’s why the Government of Nunavut has created a new action plan to fight what it calls a “public health epidemic.”

The GN’s message is clear, he said: “Tobacco use is taxing the health and wealth of Nunavutmiut.”

I am sure that these individuals are not the only ones who are inhaling the smoke. The costs to treat smoke-related illnesses and health problems are a continuous and tremendous burden on Nunavut’s health care system.”

• Adjust taxation on tobacco products and monitor its impact on sales;

• Design and implement a mass media campaign targeting youth and pregnant women which “denormalizes” tobacco products and their use.

The awareness campaign, called “Tobacco Has No Place Here,” will launch across the territory in January, 2012, in time for National Non-smoking Week.

The campaign will feature personal stories of Nunavummiut, mostly youth whose lives have been affected by smoking, as well as those who have made the choice to quit.

While youth are a major target group under the action plan, the rate of tobacco use among Nunavut’s pregnant women is also troubling.

Research from the Baffin region shows that 80 per cent of women smoke throughout their pregnancies.

That is directly related to the high rates of premature birth and lows birth weights among newborns.

Later in life, fifteen per cent of Inuit children have been shown to suffer chronic ear infections, a condition linked to second hand smoke exposure.

Second hand smoke is also linked to high rates of lower respiratory tract infections in Inuit children. The hospitalization rate to treat those lung infections is the highest reported rate in the world, according to a study of children living in the Baffin region.

Cancer is another growing concern in Nunavut, where lung cancer rates are four times higher than reported in the rest of Canada.

Tobacco use increases the risk of infection from and the spread of tuberculosis.

Circulatory diseases, including heart disease and strokes, are another leading cause of death in Nunavut also linked to tobacco.

At one time, the traditional Inuit diet provided some measure of protection against heart attacks and strokes due to the high levels of fatty acids found in marine mammals.

Today, however, the high rates of smoking combined with other lifestyle changes, continue to put Inuit at risk for cardiovascular disease. 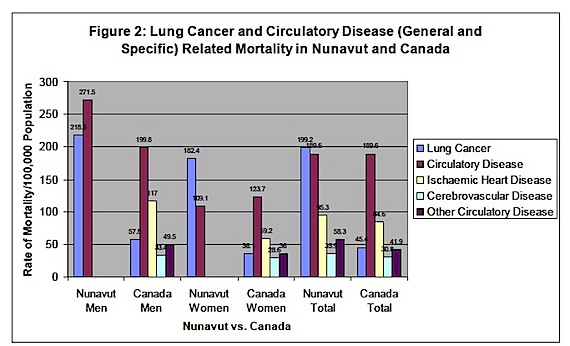 This graph from the Nunavut Tobacco Reduction Framework for Action shows that a higher percentage of people in Nunavut die from lung cancer and circulatory disease than in the rest of Canada.