Genetic analysis of samples from 98 polar bears points to lack of immunity to new viruses, bacteria and parasites 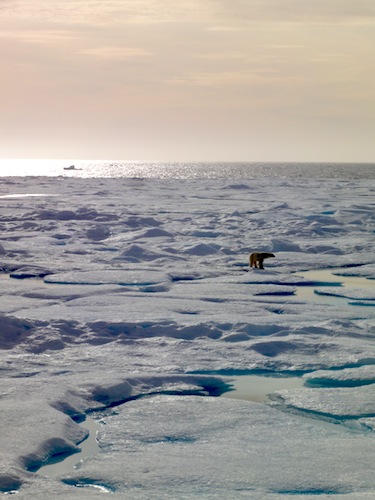 A new study says polar bears, like this one walking on the ice off the north Baffin coast, may be at risk of new diseases and parasites as the climate warms. (PHOTO BY JANE GEORGE)

Polar bears may have little immunity to new germs and parasites likely to move north along with new animals as the Arctic climate warms.

Animals in the Arctic are exposed to a low number of pathogens — that is, disease- and illness-causing viruses and bacteria— and parasites, but with rapid climate warming, this is expected to change, say the authors of the Government of Nunavut-supported study recently published in the Animal Conservation journal.

An “insidious consequence” of climate change is exposure of Arctic species to new pathogens from more southern species expanding their range northward, the researchers say.

To assess the potential vulnerability of polar bears to disease exposure, the researchers examined genetic variation in the immune system of 98 polar bears from Nunavut. They found the bears had a low genetic diversity, consistent with a long-standing exposure to a certain and limited number of pathogens and parasites.

Adaptation for survival in the Arctic environment seems to have resulted in a reduced disease resistance in the immune system of polar bears, they concluded.

Previous studies have also shown how climate change and disease may act also together to increase environmental stressors on species, reducing their immune function and affecting their overall survival.

Because even “slight environmental temperature shifts can translate into changes” in germs, Arctic and subarctic ecosystems may be at great risk for emerging diseases from rapid climate changes, the researchers say.

The Nunavut Wildlife Management Board, Nunavut Tunngavik Inc. and the National Science and Engineering Council also helped with money to conduct field research.

“We greatly appreciate their efforts and thank the hunters,the Government of Nunavut, their technicians and conservation officers for the collection of polar bear tissues,” said the researchers led by Diana Weber from the New College of Florida.