Coroners inquest, with community jurors, will seek answers in 2012 death of Solomon Uyarasuk 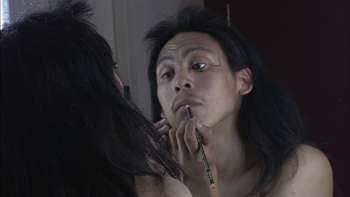 The 2012 death of Solomon Uyarasuk, an Artcirq performer, will be the focus on an inquest being held in Igloolik from Nov. 24 to Nov. 28. (PHOTO COURTESY OF ARNAIT VIDEO)

Friends, family and fellow Iglulingmiut will finally learn about the circumstances surrounding the death of Solomon Uyarasuk, who died while in RCMP custody in Igloolik more than two years ago, when a mandatory coroner’s inquest into his death gets under way in that community Nov. 24.

The purpose of the inquest into the death of Uyarasuk, a 26-year-old musician, artist and performer with the popular Artcirq troupe, is to establish the cause of death, not to find fault.

Inquests in Nunavut are mandatory when a citizen dies while in police custody. They may also be held to investigate unexplained or unnatural deaths.

The inquest in Igloolik, which runs from Nov. 24 to Nov. 28, will include testimony from the RCMP members on duty at the time of Uyarasuk’s death, Ontario Provincial Police members who conducted an external investigation after his death, the pathologist who conducted an autopsy on Uyarasuk, as well as from family and neighbours, Padma Suramala, Nunavut’s chief coroner, told Nunatsiaq News earlier this month.

The official cause of Uyarasuk’s death on Sept. 23, 2012 — widely suspected to have been suicide — and the circumstances surrounding it was never revealed by police or the chief coroner, leading to frustration, unresolved grief and speculation within the community. Uyarasuk’s birth mother has been told of the immediate cause of her son’s death, Suramala said.

That’s part of the mandate of a coroner’s inquest, Suramala said. When a mandatory inquest is ordered into the death of a person while in police custody, it is up to the jury at the inquest to categorize the death as a homicide, suicide, accidental death or a death by natural causes.

On the first day of the inquest six Iglulingmiut will be randomly chosen to form the jury. They will be pulled from a pool of 20 community members already summoned by the coroner, Suramala explained.

After hearing all of the testimony and reviewing all of the evidence, jury members will be charged with two tasks, Suramala said: to categorize Uyarasuk’s death and to make recommendations aimed at avoiding similar deaths in the future.

But many Nunavummiut have been wondering why this mandatory inquest has taken so long to occur, considering it’s been more than two years since Uyarasuk’s death.

During the legislative session in February 2013, a few months after Uyarasuk’s death, Louis Tapardjuk, then MLA for the Amittuq riding, asked Daniel Shewchuk, the justice minister at the time, when an inquest would be held.

“When a death occurs in a jail, lock up or correctional facility under the Coroners Act, inquests must be held in public,” Tapardjuk said on Feb. 23, 2013.

Shewchuk replied that an inquest would be held after the external police review was completed and reviewed.

Tapardjuk received another partial answer from Shewchuk later that year, during the fall legislative sitting in 2013. The former justice minister answered the same question by saying an inquest would be held sometime the following year.

But it wasn’t until July 2014 — 22 months after Uyarasuk’s death — that Suramala announced the inquest would finally take place, in November.

These delays lead Tapardjuk to repeatedly call for an independent policing council in Nunavut, which already exists in the Yukon and Northwest Territories, so residents can offer input on local policing.

Arnait Video Productions, a film company based out of Igloolik, produced a documentary called Sol, which premiered recently at the imagiNATIVE film festival in Toronto, chronicling the grief and many questions family and friends continued to struggle with in the wake of Uyarasuk’s death.

“We want to understand how he died,” Susan Avingaq, an Igloolik elder who co-directed the film, says in the documentary. “This tragedy is not just about Solomon. This is about everyone struggling with suicide.”