Only one individual charged with impaired driving 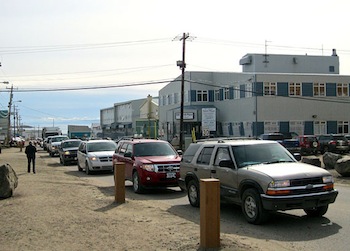 Of the 776 vehicles stopped at the RCMP’s sobriety checkpoints throughout Nunavut May 21, one individual was charged with impaired driving. (FILE PHOTO)

Nunavut RCMP stopped more than 700 drivers across the territory over the May long weekend, as part of the National Impaired Driving Enforcement Day.

Of the 776 vehicles stopped May 21 in sobriety checkpoints throughout Nunavut, one individual was charged with impaired driving, the RCMP said in a May 27 release.

Another driver saw their license suspended for a 24-hour period, police said.

Nunavut drivers fared better this year than during the 2015 May long weekend, when police charged six people with impaired driving, and another seven people saw their licenses suspended.

But the RCMP said earlier this month that, due to a bump in impaired driving collisions and investigations in Iqaluit, police would conduct extra enforcement.

“Keeping Nunavut’s roads safe is everyone’s responsibility and that enforcement is only one tool used to achieve this goal,” the RCMP said May 27.

“Everyone can play a role in saving lives by choosing not to drive impaired and ensuring that people around you do the same.”

Nunavummiut who are planning to drink or use drugs should always find an alternative way to get home, such as calling a taxi, or using a designated driver, the RCMP said.

Police also encourage Nunavumiut to ensure that friends who could be impaired do not get behind the wheel of a car, a snowmobile or an all-terrain vehicle.

The RCMP warned drivers that using drugs, even prescription drugs, can be just as dangerous as drinking alcohol and driving.

“Drug recognition experts can determine that you’re under the influence of a drug and you can be charged with drug-impaired driving,” the RCMP said May 27.