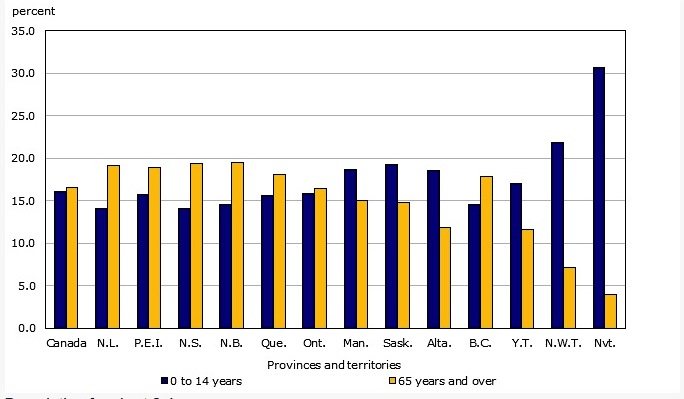 This Statistics Canada graph from its latest demographic portrait of Canada shows how young the population of Nunavut is compared to other jurisdictions in Canada.

Nunavut, you’re young and growing, with your population now standing at 37,082, the youngest of any Canadian territory or province.

And if the numbers of people in Nunavut continue to grow — as these did over this past year, by the 882 births recorded, it won’t be long before Nunavut’s population surpasses Yukon’s tally of 37,492 residents.

That’s among the information contained in a demographic portrait of Canada released Sept. 28 by Statistics Canada, which shows Nunavut can lay claim to the largest natural population increase of any province or territory in Canada.

Overall, Nunavut’s population is growing more than twice as fast as Canada’s.

The StatsCan numbers also show Nunavut remains different in other ways from the rest of Canada’s jurisdictions.

But there are fewer people over 65 in Nunavut— with less than five of every 100 Nunavut residents over 65, while there are more than 16 seniors for every 100 people in the rest of the country.

New Brunswick was the province with the largest proportion of people aged 65 and older—19.5 per cent—while Nunavut, the lowest of any province or territory, that proportion is only about four per cent.

As well, there are more men in Nunavut than women.

In 2016, males outnumbered females in all the territories, with Nunavut having the highest ratio of males.