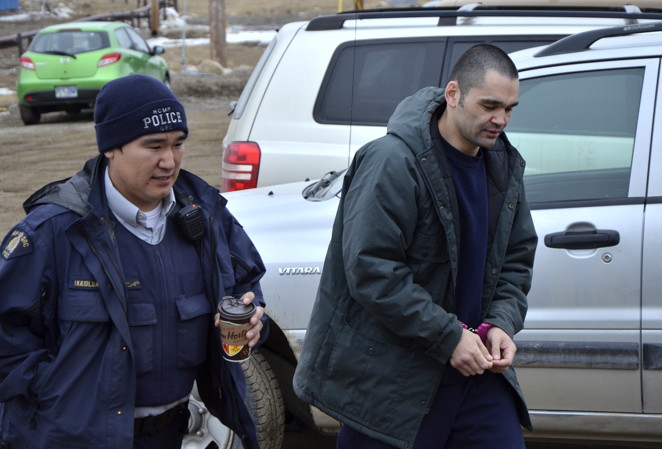 Herbert Janes is escorted into the Nunavut Court of Justice May 27. (PHOTO BY DAVID MURPHY)

It was pandemonium inside Iqaluit’s Baffin Correctional Centre on Nov. 12, 2012, the night of its infamous two-blaze fire, the Nunavut Court of Justice heard May 26 and 27.

And it all started when Herbert Janes’ plot to smuggle drugs into Iqaluit’s notoriously drug-ridden prison went awry.

The details of that November night of mayhem were contained in two slightly different agreed statements of fact presented during the sentencing of Janes and Willie Ishulutak, both 34.

This was the plan: one inmate was supposed to shank another inmate so that the injured inmate could to be taken to Qikiqtani General Hospital and later return to the jail with contraband drugs.

But the plan failed. Janes not only became suspicious, but “irate,” according to an agreed statement of facts read aloud in court by prosecutor Indra Bhaggan for Janes’ May 27 sentencing.

Janes smelled a rat and he formed suspicions about a fellow inmate.

According to another agreed statement of facts read in court May 26, for the sentencing of Ishulutak, Janes ordered another inmate to start a fire to create a distraction.

Janes’ lawyer David Berg disputed this fact during Janes’ court appearance the next day, so it was omitted from the agreed statement of facts entered May 27 for Janes’ hearing.

An inmate started a fire in the ceiling of a washroom close to cell dorms, using paper towel and toilet paper. At 10:08 p.m., fire alarms went off and the first wave of chaos descended.

The guards relocated prisoners as best they could when firefighters arrived at 10:15 p.m. Some went outside in -20 C weather. But more than four dozen of them were corralled in the gymnasium.

Jail staff “deemed it unsafe to enter the gym as a mob mentality was brewing,” and some staff overheard threats of rioting, so guards locked the door and stood outside.

Janes was one of the inmates inside the gym — and so was his suspected “rat.” Janes told inmates to cover the security cameras and rip out wiring. Janes’ cousin, Willie Ishulutak, complied.

Events then took another bad turn.

“Hey, what do they do to rats? Rats get beat up and ganged up,” Janes yelled at the inmates.

The suspected inmate told the mob he never ratted anyone out and it wasn’t him who foiled Janes’ plot to smuggle drugs, but Janes ignored his pleas and ordered the men to “go get him.”

Janes told fellow inmates if they didn’t participate in the beating, they would be targeted next. “Jump in,” he said. “If you don’t, you know what’s going to happen.”

Janes started the fight by kicking the man in the head. Other inmates punched, kicked and stuck him with plastic cups.

The inmate fought back but suffered a two-inch laceration to his head, later requiring 11 stitches.

The fight stopped at 10:45 p.m. when three guards dragged the victim out of the gym.

But blood had been spilled on the pillows and sheets of beds in the gym where some inmates regularly slept. The group wanted to destroy the evidence so an inmate used a lighter to set fire to blankets in the gym’s closet.

When the fire started, Janes told the inmates to line up against the wall. The inmates followed his orders.

According to facts presented in court, when Janes ordered you to do something — you did it: Janes was “feared by many of the inmates at BCC.”

He warned against ratting to guards about the fight — “nobody should talk to the guards or the cops.”

Meanwhile, the varnish on the wood in the gymnasium closet fuelled the fire and it spread rapidly. As the fire grew, inmates rushed to the exit to escape, but the guard had closed the door on them.

Once guards realized that flames were engulfing the gym’s closet, they tried to open the door but the fire’s back draft made it difficult to open. In fact, the security glass on the door started to bubble.

They finally managed to open the door and inmates were escorted to a recreation room. Firefighters, already at the scene for the first fire, quickly extinguished the second one in the gym.

After the flames were doused, some inmates were relocated to Nunavut Arctic College’s old Ukkivik residence, while others were put into cells at the RCMP detachment for the night.

“Ridiculous” is how Justice Andy Mahar described the whole event.

“It’s a waste of your potential. It’s a shame, what you’re doing to yourself,” Mahar told Janes directly in court.

“Not even fuelled by alcohol… ridiculous,” Mahar repeated.

Janes pleaded guilty to aggravated assault, and Crown and defence lawyers agreed on a three-year prison sentence. Factoring in time served, and Janes will only serve one extra year in prison.

“I don’t really have much to say,” Janes told the court when asked if he wanted to speak. After receiving a hug from his mother, an RCMP officer escorted him out of the courtroom.

Willie Ishulutak also pleaded guilty to charges of assault, arson and intimidation of a justice participant May 26. Ishulutak received a three-year sentence, but has 29 months left to serve.

The total cost of the fire, including repairs to BCC and staff overtime, was calculated at $130,000.

A publication ban protects the identity of all other inmates involved in the incident, save for the two men charged.