Nunavut rock hounds dig for treasure on the tundra

“Prospecting is not a slam dunk — it takes work, perseverance and luck” 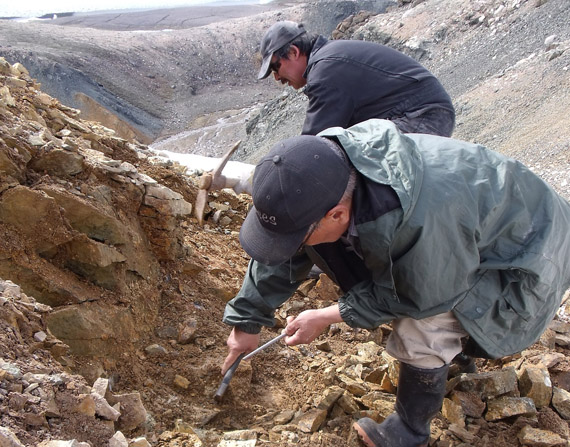 Since 2001, over a thousand Nunavummiut have taken the government of Nunavut’s prospecting course. The GN is offering courses again this summer in eight Nunavut communities, along with subsidies for amateur prospectors. (PHOTO COURTESY OF EDT-MPR, GN) 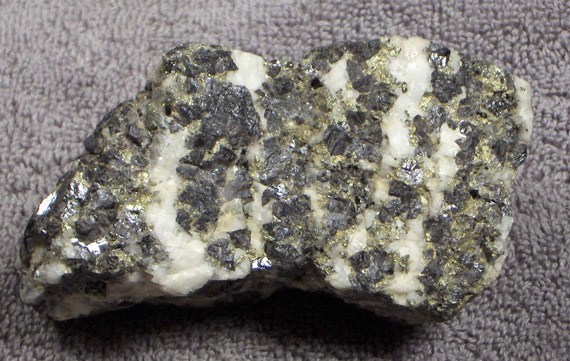 This Nanisivik zinc ore sample comes from just outside Arctic Bay, roughly 25 km from the closed and reclaimed Nanisivik Mine, which between 1977-2002 produced and shipped 2.6 million tonnes of zinc-lead-silver concentrate. (PHOTO COURTESY OF EDT/GN) 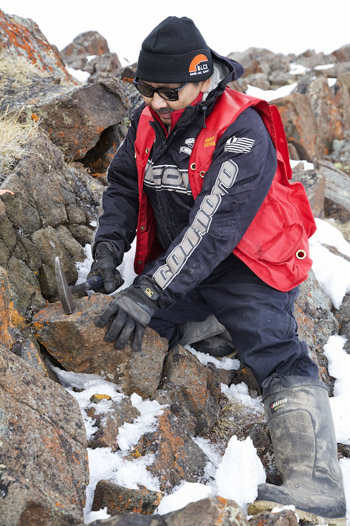 Harry Iyerak is an active prospector based in Arctic Bay. (PHOTO BY CLARE KINES)

Harry Iyerak is an avid hunter.

As one of the few active Nunavummiut prospectors in the territory, his game is rocks and minerals — the wealth that lies etched into Nunavut’s landscape.

He came by it naturally; his father mined nickel in Rankin Inlet in the 1950s.

Iyerak took a shine to minerals as a young college graduate and signed up for his first prospecting course in Igloolik in the 1990s, offered through the Qikiqtaaluk Corporation.

“We went out onto the land with a geologist, just to get a feel of the formation of the land,” he said. “He was showing us how to find garnets, and other coloured gems. I guess I got hooked.”

Since then, Iyerak, who now calls Arctic Bay home, has learned to stake and collect samples. He’s worked as an interpreter for geologists working in the territory, with DeBeers while they explored the Foxe Basin region, and the Geological Survey as they mapped Baffin Island.

Now Iyerak is working to launch his own prospecting business, called Kasuk Exploration, to partner with other companies looking for base and precious metals in the territory.

Iyerak won’t give away too many secrets about the treasures he’s uncovered. It’s taken a lot of time and effort, he says, but there’s room out there for Nunavummiut to tap into the mining industry, even in their own backyards.

Since the Government of Nunavut began offering free prospecting courses to the population in 2001, over a thousand Nunavummiut have signed up to take them.

The course attracts people who are interested in rocks and minerals that lie hidden outside their communities — and they’re a surprisingly large group, said territorial geologist Mike Beauregard.

“You don’t see geologists in your community very much,” Beauregard said. “So when I’m visiting, I’m always approached by people who want to show me what they’ve found.”

In places such as Igloolik, Coral Harbour and Hall Beach, for example, there’s a big interest in fossils, he said.

“So the course is satisfying a personal interest,” he said. “These are people who’ve been collecting rocks and minerals their whole lives and want to know what they are.”

The GN’s 25-hour course is being offered in eight Nunavut communities this summer, free of charge. Beauregard is one of the instructors teaching the program.

In each course, about a dozen participants spend five nights in a classroom with a geologist, poring over samples of Nunavut’s precious and base metals, from carving stone and rose quartz to gold and diamond kimberlites.

The GN has also put together a rock kit including 75 samples of rocks found across the territory, explaining each mineral and where it’s found.

Gold is fairly widespread across the inland part of the territory, along with diamonds, while uranium deposits tend to be north, Beauregard said.

But Beauregard warns, all that glitters is not gold.

“Prospecting is not a slam dunk — it takes work, perseverance and luck,” he said. “For every mine, there’s a hundred other places that didn’t make a mine.

Nunavut hasn’t yet matured its own homegrown expertise although there are a handful of experienced prospectors, like Iyerak, who have made money from their exploits.

Two men from Kimmirut made headlines in early 2004 when they discovered blue sapphire deposits near the community and sold their claims to True North Gems.

So there’s nothing stopping prospectors from dreaming, Beauregard said.

Although the GN has yet to be contacted about pieces of meteorite founds across the territory, Beauregard says it’s quite possible people might find those outer space treasures on the frozen sea ice or tundra as well.

He recounts the story of the British Columbia man who witnessed a meteor streak across the sky in 2000, leaving pieces strewn across the frozen Tagish Lake.

The witness was able to collect more than a dozen pieces of the meteorite and sold them for thousands of dollars.

“I always ask my students: have you ever seen something that looks like a rock, but not quite like animal droppings?” he said. “I always get a nod.”

“I tell them, ‘there’s a pretty good chance it fell out of the sky,’” he said.

Part of his course this summer will show students how to differentiate between a meteorite and what Beauregard calls a meteor-wrong.

“In the hands, they might seem partly metal and partly rock-like, with a black crust.”

Meteor-wrongs are often chunks of iron, rusting out on the land, he said.

Program graduates can also apply for subsidies of up to $8,000 a year to help pay for wages, materials and prospecting supplies.