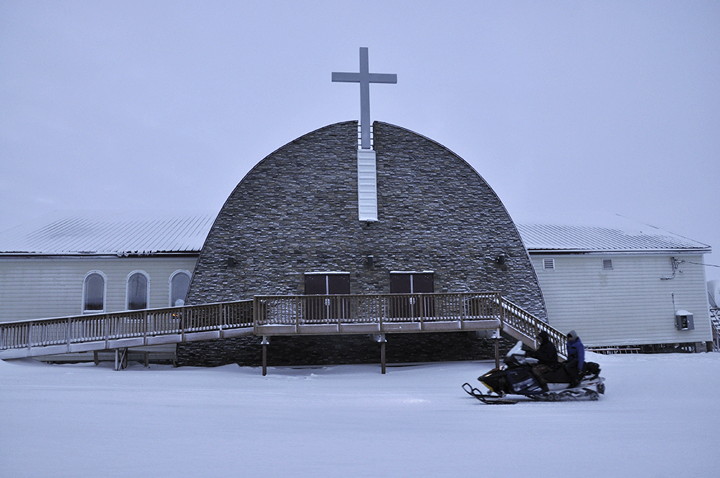 The cross on the new St. Stephen’s Catholic Church in Igloolik looms large. Following a coroner’s inquest in that community, RCMP say they are now undertaking a comprehensive review of recommendations from jury members. (PHOTO BY THOMAS ROHNER)

Nunavut’s RCMP says they are responding to nine recommendations arising out of Solomon Uyarasuk’s coroner’s inquest — but top brass at Nunavut’s “V” division have not committed to re-opening the investigation “to fill in missing information,” as recommended by the jury.

“A comprehensive investigation into the circumstances of the death of Mr. Uyarasuk was completed independently by the Ottawa Police Service,” a Dec. 2 RCMP news release said , “and they reported their findings directly to the Office of the Chief Coroner.”

The release said Nunavut’s “V” division has begun a comprehensive review of the recommendations, locally and with national RCMP policy centres, but cautioned that a full review will take “some time” to complete.

“We are not in a position at this time to speak to each specific recommendation,” the release said.

A week-long inquest into the death of Uyarasuk, a 26-year-old artist and Artcirq performer found hanging inside an Igloolik prison cell in September 2012, ended Nov. 28 with the six-person jury classifying the death as “undetermined.”

A coroner’s inquest is automatically triggered when someone dies while in police custody.

An undetermined death means there is insufficient evidence to categorize the death as anything else—as a suicide, for example, as the RCMP lawyer recommended during the inquest.

Uyarasuk’s family lawyer, Mark Mossey, raised a number of concerns about the Ottawa Police investigation when Sgt. Dan Brennan, the investigation case manager, testified at the inquest on Nov. 24.

Local members of the RCMP did not seal the scene of Uyarasuk’s death, for example, for more than six hours after Uyarasuk was found hanging by a belt from the meal-slot of his prison door.

During that time, the two RCMP officers who had arrested an inebriated Uyarasuk, and who were still on duty when he died, were left alone in the detachment, raising concerns that evidence on the scene could have been tampered with.

“The investigation did not ask the hard questions,” Mossey said during his final arguments at the inquest Nov. 28.

Police in Nunavut have already started “a number of processes to ensure prisoner safety,” the release said, including the regular inspection of detachments.

The coroner’s jury recommended regular detachment inspections to ensure “deficiencies be fixed in a timely manner.”

This likely refers to the broken meal-slot latch from which Uyarasuk was found hanging, and which local RCMP members knew posed a suicide risk.

Cpl. Lorne Morrison, who arrived in Igloolik less than two weeks after Uyarasuk’s death to take over as detachment commander, testified Nov. 27 at the inquest that he learned about Uyarasuk’s death from rumours and media reports circulating at the time.

“Did you think it was odd that nobody told you about how Solomon died?” Mossey asked Morrison.

“I thought that was unusual, yes,” Morrison replied.

After noting safety issues within the cell block area, Morrison testified that he made sure officers and cell guards were aware of the faulty latches, instructed guards to alert an officer if a prisoner repeatedly opened the latch, and ordered suicide-proof clothing for those in custody.

In the spring of 2013, about half a year after Uyarasuk died, Morrison testified that he sent an email to his bosses in Iqaluit, informing them about safety concerns he had with the Igloolik cells, including the broken food-slot latches.

Const. Noel Martin, the previous Igloolik detachment commander, also testified at the inquest that he had sent an email about the broken latches to Nunavut RCMP headquarters in September 2012, just days before Uyarasuk died.

Morrison testified that his superiors thanked him for his email and told him repairs to the Igloolik detachment’s cells would be prioritized accordingly.

In the fall of 2013, with no repairs in sight, Morrison took matters into his own hands and had a contractor, who was fixing something else in the detachment at the time, seal the latches.

Sealing the latches raised other safety concerns, Morrison said, but it was the lesser of two evils because he was able to neutralize the suicide risk they posed.

Morrison also said he had a basic camera system installed outside the cells that showed the cell block area, including the outside of the meal-slot, so that “we could see what people were doing with the slot.”

Those cameras, which cost $400, were installed by a local RCMP officer who was familiar with that kind of equipment.

It wasn’t until the spring of 2014 that the RCMP sent a contractor to Igloolik to properly fix the broken meal-slot latches, Morrison testified.

And as of August 2014, Morrison said, the cameras he had installed in the cell block area were the only cameras in the Igloolik detachment.

The Dec. 2 RCMP news release said they have begun installing closed circuit cameras in cell blocks. Those cameras, Morrison testified at the inquest, cost about $20,000.

Neither RCMP V Division, nor RCMP headquarters in Ottawa, replied to interview requests by publication time.

They also did not reply Dec. 2.

The jury’s recommendations will be sent to a number of territorial and federal agencies, the inquest’s presiding coroner Garth Eggenberger explained during the inquest, but those agencies are not bound by law to implement them.