“I know it’s not as attractive as a pool. But it definitely is something that will reduce the costs of operating in the North.” 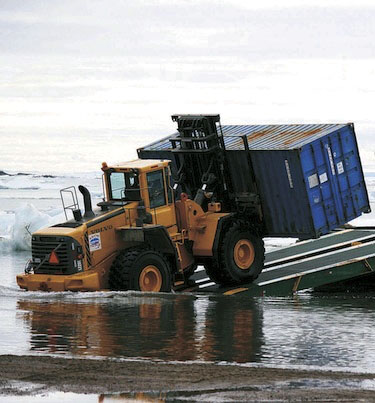 In an undated file photo, a forklift lifts a crate at the sealift beach in Iqaluit. (FILE PHOTO)

Marine infrastructure is an issue for many Iqaluit candidates in this territorial election, with several of them calling for a new dock or a deep sea port in their campaign platforms.

For Suzanne Paquin, the president of Nunavut Eastern Arctic Shipping, this couldn’t make her happier.

“If all the candidates are talking about it, it’s a very good start,” Paquin told Nunatsiaq News.

She cited Nunavik as an example, where 14 communities benefited from a 10-year, $88 million project, funded by the federal and provincial governments, that constructed basic docks, ramps and roads.

“I know it’s not as attractive as a pool. But it definitely is something that will reduce costs of operating in the North,” she said

For Iqaluit, she said a low-cost solution may be the rebuilding of the old causeway — so NEAS can offload cargo faster in Iqaluit and then deliver freight to other communities more efficiently.

“It would improve the sealift in all communities, because it would allow us to have an increased turnout time,” Paquin said, adding that Nunavut shipping volumes are up this year in all categories.

Speaking at a Women’s International Shipping and Trading Association conference last week in Montreal, Paquin said cargo volumes by marine vessels have risen by 66 per cent in Nunavut since 2007.

And in 2012, NEAS made 93 stops during the shipping season, an all-time record, including six stops in Iqaluit and three in Kuujjuaq.

NEAS also added a new ship to its fleet this season, the MV Mitiq.

But not only does Iqaluit need to rebuild causeway because of an increase of marine traffic, Paquin said basic marine infrastructure in all communities is “really the backbone of developing the economy in Nunavut.”

“The marine infrastructure deficit in Nunavut definitely increases the cost on everything. On all the developments in Nunavut — from cost of housing, to the construction of all the buildings,” Paquin said.

A 2011 study called “If Not Now… When? Addressing the Ongoing Inuit Housing Crisis in Canada” by the National Aboriginal Health Organization said a key factor contributing to the high cost of housing in the North is the expense involved in shipping building materials, a limited shipping season, and a lack of accessible roads to communities.

And in the Nunavut Housing Corp.’s 2012 document called “Lessons Learned” — which explained the $110-million cost overrun fiasco — one “negative result” was the use of seacans to ship housing equipment, and the fact that “not all communities [were] equipped to move large heavy seacans.”

“The more people understand the way it is in the remote communities in the Arctic, the more obvious it becomes, what really needs to happen,” Paquin said.

But “aside from the economics,” Iqaluit needs basic marine infrastructure to improve safety for workers and the public.

“It would be much safer and much more secure for our employees,” Paquin said.

This year a blue mobile office has been a new fixture on the Iqaluit beach where cargo is unloaded.

Transport Canada and the Canadian Coast Guard helped “introduce” the office to make it safer for people to collect cargo.

“This will make the pickup of the cargo a little easier for our people, for our employees and for the customers, because they’ll go to the office instead of going to where our guys are working,” she said.

Paquin said she is “not lobbying” governments like the Government of Nunavut, the federal government or the City of Iqaluit for marine infrastructure, but talking to them often to “make decision makers aware of the challenges of the Arctic sealift.”

Paquin said that there is federal money available for ports, but that local stakeholders have to “make marine infrastructure a priority at the community level.”

“It has to be a public interest project. That will contribute to the economic and social development of not only Iqaluit, but all of Nunavut,” she said, adding that all levels of government including Inuit organizations and marine users must work together.