Nunavut Sivuniksavut students get set for a European adventure 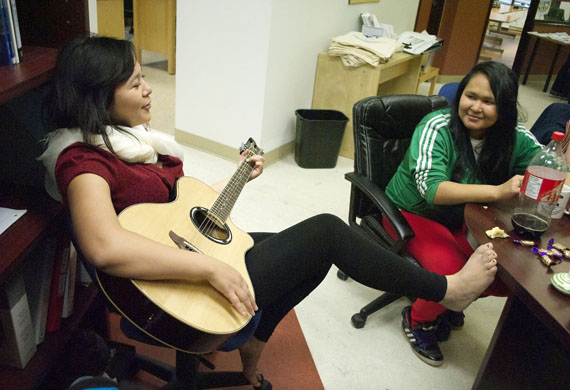 Christine Tootoo and Ruthie Mingeriak, students at the Nunavut Sivuniksavut program in Ottawa, relax on their last day before Christmas break. NS students have voted to travel to France, Germany, Belgium and The Netherlands on their annual school trip next year. (PHOTO BY BRIELLE MORGAN)

OTTAWA — There’s a buzz in the air today at Nunavut Sivuniksavut, the transitional college program for Inuit youth in Ottawa.

It’s Dec. 14, the last day of school before winter break. Students crowd around a desk cluttered with chip bowls and plastic cups in the common room.

Christmas songs on the stereo compete with 17-year-old Christine Tootoo on guitar, as she leads her classmates in a casual Inuktitut sing-along.

Tootoo has plenty of cause for excitement. Not only is she going home to Iqaluit for Christmas, she’s also going to Europe in the spring.

This week, first-year students at NS presented 10 possible destinations for their year-end trip.

Tootoo, along with three classmates, pitched a multi-country trip: France, Germany, Belgium and The Netherlands. Then came the big vote. Tootoo’s group beat out the runner-up, Panama, by a single vote.

Each year, NS students travel to a different destination as ambassadors for the Inuit and for Canada. In previous years, students have traveled to countries such as New Zealand, Peru, Norway, Sweden and the United States.

“Typically, we go to countries where there are other indigenous folks and who would find the Nunavut story very inspiring for them,” longtime instructor Murray Angus said.

But staff and students alike recognized a need for more Inuit voices in Europe right now.

“There are opportunities for the students to support the effort of ITK and ICC in educating Europeans about issues of relevance to Inuit and Nunavut,” Angus said.

Climate change is one of the issues on the agenda. But Tootoo is particularly eager to talk about seals.

“It’s obvious that people aren’t very educated about how we use seals in the Arctic. It would be a really good thing to get the message out there: we don’t go clubbing seals for fun,” she says.

Tootoo takes her role as an ambassador seriously. When asked what she’s most looking forward to about the trip, it’s business – not pleasure – that takes precedent.

“I’m really excited about presenting to the public and embassies or politicians.”

She’s hopeful their visit will leave a strong impression on the people they meet.

“I’m kind of hoping that they expand their minds a bit more, like not so close-minded about seals,” she says.

At the same time, Tootoo’s excited about the performing aspect. Both at home and abroad, developing traditional performance skills is a big part of the program at NS.

Tootoo’s not shy about taking the stage.

Angus has taught many years at NS since its founding in 1985. He says the school’s emphasis on performance is relatively new.

“Cultural performing is now a very integral part… of what students do here, learning those skills and taking those out into the community.”

Of course, there’s considerable work to be done before the students can share their passion and their politics with Europe.

Angus estimates the trip will cost about $80,000. At 30 students, it’s the biggest class yet – thanks to funding for a school expansion from government and various Inuit organizations.

Program funding won’t cover the trip to Europe, however. Students need to raise this money themselves.

The fundraising aspect of the trip is a lesson in itself. The process involves drafting personalized letters and getting on the phone with as many Inuit-owned business and organizations in Nunavut as possible.

“It has to be done very precisely, very professionally. Anything we don’t raise, students have to cover themselves.”

That said, Angus is confident the students will have no trouble hitting their target.

“People in the North are very generous. Families, organizations, (and) businesses are very supportive of young people doing good things.”

“I always wanted to see Europe, see the culture and stuff… it’s Europe. I’m excited to go to France and see the Eiffel Tower.”

Like Tootoo, she’s grateful for the opportunity to go to school at NS.

“This school is too awesome. You learn about your own culture and your ancestors, where they came from and how it all changed. It’s exciting.”

You can almost see the positivity oozing from this Rideau Street building. It’s no wonder Angus has worked on and off with the school for more than two decades. Two of the newest staff members are even former students, he says.

As for Tootoo, she’s not sure what she’ll do when she graduates, but she’s hoping for acceptance to the second-year program. Judging by her leadership with regards to class trips and sing-alongs, prospects are good.

As for what she’s looking forward to most about spending Christmas at home, that’s easy.

“Being around people I know and not having to cook food all the time.”