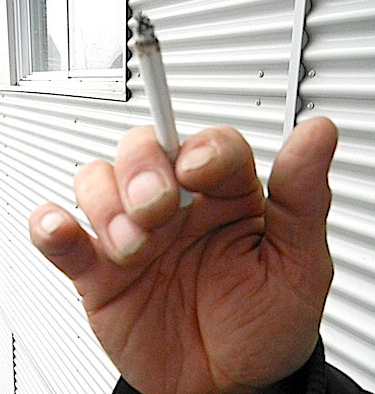 Health Minister George Hickes confirmed this week that despite having the highest smoking rates in the country, no fines have ever been levied against people smoking in non-smoking areas under Nunavut’s Tobacco Control Act. (FILE PHOTO)

Twelve years into implementation, no fines have been levied under Nunavut’s Tobacco Control Act for smoking within prohibited areas despite the territory remaining the highest per capita smoking jurisdiction in Canada.

That’s according to Health Minister George Hickes who responded to queries from South Baffin MLA David Joanasie on the implementation of the Tobacco Control Act during question period in Nunavut’s legislature Oct. 24.

“Can the minister clarify whether any contraventions to the Tobacco Control Act, specifically with respect to smoking within a prescribed radius, have ever been recorded and if any fines have ever been levied?” Joanasie asked.

“To my knowledge, there have currently been no fines levied for smoking within those parameters,” Hickes responded.

Across the territory, smoking is not permitted within three metres of a workplace or public place—or within 15 metres of a school—under the tobacco act.

In June, Iqaluit’s Qikiqtani General Hospital implemented a no smoking policy on its campus, designating two specific areas away from the main entrances to smoke.

According to a Canadian Community Health Survey from 2014, Nunavut’s smoking rate is the highest in Canada—at a whopping 62 per cent compared to the national average of 18.1 per cent, all tallied in 2013.

Hickes told MLAs that the Department of Health has been focusing on tobacco education and compliance programs targeting youth as well as consultations and marketing initiatives to reduce smoking.

Joanasie pressed the minister, asking if any inspectors have been appointed under the Tobacco Control Act and if not, who was enforcing the law.

“Currently, we have environmental health officers who are doing inspection of retailers,” Hickes responded.

Joanasie asked Hickes if he would consider updating the act, in conjunction with drafting a new anti-smoking plan, by expanding the no-smoking radius around buildings and doorways and also areas under building intake vents.

Hickes thanked Joanasie for his suggestions, but said there is currently no plan to amend the Tobacco Control Act.

But Hickes added that his department is hoping to gather more data to evaluate the success of its various anti-smoking programs.

“We’re bringing in new software, upcoming, to be able to track usage and make more community-specific programs,” he said.

A current figure was not provided in the most recent Tobacco Control Act annual report of 2014-15, but that number would likely be higher than in 2011-12 due to tobacco tax increases passed on to retailers by the Government of Nunavut in 2012.