“This is more about exposure to the business world” 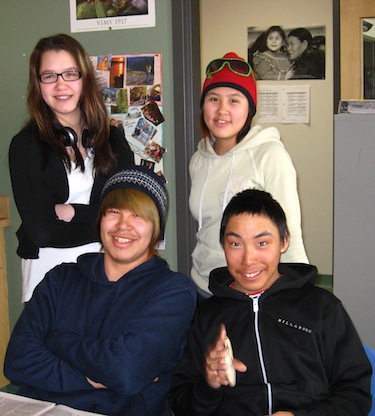 These students in John Arnalukjuak’s High School E-spirit team are ready to present their business plan in front of more than 150 high school students from aboriginal communities across Canada. (PHOTO COURTESY OF C. PATERSON)

What’s the best place in Coral Harbour to get a coffee?

So a team of students at Sakku School created a plan for one, which would be part of a mini-mall that would also include a crafts shop and a store that sells formal wear, and submitted it to the Business Development Bank of Canada’s E-Spirit competition.

The students qualified for the finals and in mid-May will be traveling to Winnipeg to present their business plan in front of more than 150 high school students from aboriginal communities across Canada.

Traveling with them will be a group of students from John Arnalukjuak School, in Arviat, whose business plan was for a photography and printing business, a service lacking in the community.

“Right now there are only hobbyists who might do you a favor periodically,” explained Charlene Paterson, the teacher leading the John Arnalukjuak student group.

“If people want to print something the only thing available is a Kodak kiosk at the Northern and it’s always out of order and if it is working there’s a huge line and it costs $1.79 a picture and it’s not good quality.”

The E-Spirit competition, now in its 12th year, is aimed at giving students in First Nation and Inuit communities entrepreneurship skills and the ability and confidence to succeed in the business world.

In Inuit communities, where many conveniences common in the South are lacking, the competition serves as a prime opportunity for students to think about the services they would like established in their communities.

“We want students to get familiar with what it takes to be an entrepreneur for when they finish their high school careers,” said Cheryl Watson, who runs the E-Spirit competition.

“One of the things we realize that is a stumbling block for even adults today is writing a business plan.”

Students began the competition last fall, by submitting a series of assignments through the E-Spirit website.

The first task was an entrepreneurial assessment, followed by a business overview and a mission statement.

Creating a financial overview that assesses the costs of starting a business was a later assignment, and is typically the most difficult one for the students, said Lisom Tam-Eveleigh, who led the student group at Sakku School.

This year, 165 teams from more than 50 schools entered the competition. Only 57 teams, from 25 different schools, will be traveling to Winnipeg to present their business plans for the finals of the competition.

In Winnipeg, students will stay in dorms and eat in a college cafeteria, in an effort to simulate what a real university experience is like. They will present their projects to an assembly of more than 150 aboriginal students from across Canada and also create a display booth for a trade show.

On the last evening is an Oscars-like gala where awards are handed out to students.

“There’s definitely excitement slash nervousness,” said Paterson, of the upcoming May trip. “Only one of my students has ever been south before and none of them has ever been to Winnipeg.”

“But I’m trying to take the fear factor away from it by saying that the point is to just have fun,” Paterson added. “This is more about exposure to the business world, you don’t necessarily have to turn your project into a business in the real world.”

But some do, in 2002 students from Sanikiluaq who had participated in the E-Spirit competition actually turned their idea into a company that helped local artists frame their carvings. The business lasted for several years but is no longer around.

“What everyone needs to realize is aboriginal peoples of Canada have always been entrepreneurs,” said Watson. “They just haven’t been called on.”