More than half of all women report childhood sexual abuse, 2007 Qanuippitali questionnaire reveals 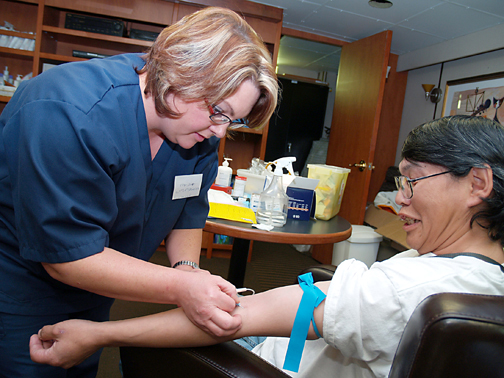 Iqaluit’s Pitsiulaq Naglingniq winces as nurse Michele Martel takes a blood sample aboard the CCGS Amundsen in Frobisher Bay in September 2007. The ship, home to the floating Qanuippitali health survey, toured Nunavut, Nunatsiavut and the Inuvialuit region in 2007 and 2008. Results from a wellness survey done in those years were released this past Sept. 21. (FILE PHOTO) 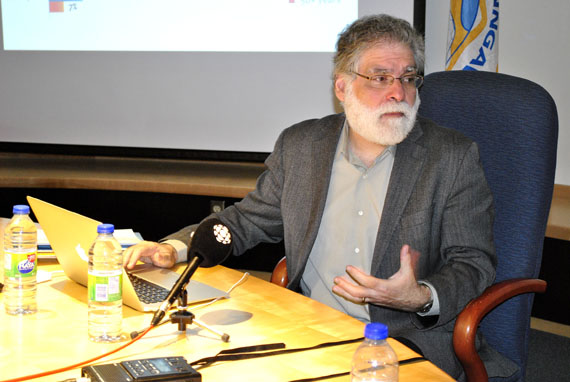 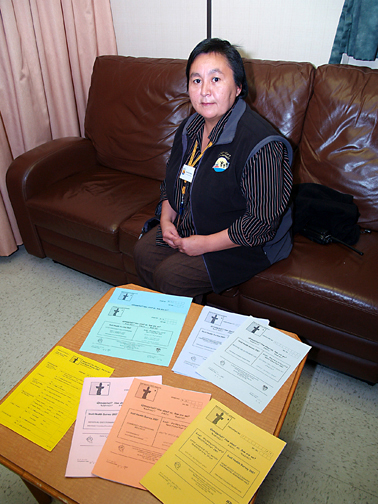 Martha Malliki, an interviewer and greeter aboard the CCGS Amundsen in 2007, displays the various survey forms that participants in the Qanuippitali Inuit Health Survey were asked to fill out. (FILE PHOTO)

About 13 per cent— more than one in 10 of all respondents — said they felt “serious psychological distress” in the 30 days before they answered the questionnaire.

The report, released Sept. 21 in Iqaluit, is derived from a community and personal wellness questionnaire handed out by researchers travelling around the territory aboard the Coast Guard vessel Amundsen in 2007 and 2008.

The questionnaire was part of the much bigger Qanuippitali survey across Inuit communities in Nunavut, Nunatsiavut and the Northwest Territories that received $10.6 million from the federal government’s pot of International Polar Years research money.

Researchers made contact with 1,923 Nunavut Inuit during the big health survey.

Of those, 1,710 did the wellness questionnaire: 1,031 women and 679 men. Not all respondents answered all questions. Participation was voluntary and some people chose not to answer some questions.

Much of the data gathered during the Inuit Health Survey has been released in different ways since about 2009, in academic papers and in written reports produced in 2010.

But this is the first release of information from the wellness questionnaire, in which people answered questions that asked them to report on their sense of wellbeing.

“I would say from a mental health point of view, those are the two things that call out for the most direct attention,” Kirmayer said.

Half of all respondents reported suffering at least one form of physical violence as an adult: 52 per cent of all women and 46 per cent of men.

Of those, people aged 30 to 49 were most likely to have suffered some form of physical abuse, at 57 per cent.

And 31 per cent — nearly one in three — of all respondents reported severe physical abuse during childhood.

Of the self-reported data on suicide attempts and suicidal thoughts, 14 per cent of respondents said they thought seriously about committing suicide during the 12 months prior to the questionnaire.

Of those, 21 per cent of those aged 18 to 29 said they thought seriously about committing suicide in the previous 12 months.

And 31 per cent of women and 25 per cent of men said they had attempted suicide at some point in their lives.

In the 18 to 29 and 30 to 49 age groups, 34 per cent of respondents said they attempted suicide at some point in their lives.

“This information will provide the context for whether or not we’re actually improving the mental health of the population or doing all we can to prevent suicide,” said Natan Obed, the director of social development at Nunavut Tunngavik Inc.

By comparison, only three per cent of Canadians, in a 2002 Statistics Canada survey reported making a suicide attempt during their lifetimes.

Among First Nations people the figure is 16 per cent and in Nunavik, a similar 2004 health survey showed 21 per cent of respondents reported making a suicide attempt during their lifetimes, Kirmayer said.

“This does not mean they had a psychiatric diagnosis. It’s not the same thing as a diagnosis for depression or anxiety or other common mental health problems but it’s likely that a substantial proportion of those people would meet those criteria,” Kirmayer said.

Other findings from the community and personal wellness survey include:

• 90 per cent of respondents report that it is important or somewhat important for them to go out on the land;

• nearly two-thirds of respondents, 62 per cent, said they have experimented with substances to get high;

• in the 12 months prior to the survey, 53 per cent of men and 37 per cent of women had used marijuana or hashish;

• among people aged 18 to 29, 60 per cent of people said they used marijuana or hashish;

• for hard drugs like cocaine or crystal meth, only 5 per cent of respondents said they used such substances in the 12-month period prior to the questionnaire; and,

• in the 12 months prior to the questionnaire, 59 per cent said they drank alcohol; 65 per cent of men and 55 per cent of women.

“It adds new information to the health status of our population. It also provides information on the underlying causes of our low health status compared to the Canadian average,” said Geraldine Osborne, Nunavut’s chief medical health officer.