Nunavut to spend more on health, education next fiscal year

“We see a Nunavut whose people are happy and whose education, skills and self-reliance give us an advantage” 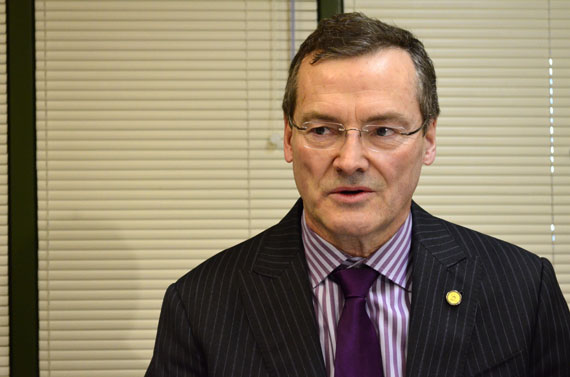 Finance Minister Keith Peterson speaks to reports Feb. 25, just before his 2015-16 budget speech. “We are driven by a vision. We see a Nunavut whose people are happy and whose education, skills and self-reliance give us an advantage in the global economy,” Peterson said. (PHOTO BY JIM BELL)

In an cheery speech given Feb. 25 at the Nunavut legislature, Nunavut Finance Minister Keith Peterson unveiled a budget for 2015-16 that will see Nunavut get more and spend more, especially on education, health, economic development and staff housing.

“We are driven by a vision. We see a Nunavut whose people are happy and whose education, skills and self-reliance give us an advantage in the global economy,” Peterson said.

In the coming fiscal year, Nunavut expects to receive $1.72 billion in revenues and to spend $1.673 billion on programs and capital projects, with a $30 million contingency fund and a projected surplus of about $23 million.

And the Government of Nunavut will raise 11 per cent of its revenues — $187 million — on its own, from taxes and other revenue sources.

The federal government will give Nunavut about $1.5 billion through the formula financing agreement and another $81 million in other transfers.

In the next fiscal year, the Department of Education’s budget will rise by 10 per cent, up to $203 million.

The department will use that money, in part, to pay for 49 new workers: six new employees to be distributed among the three regional school operations, and 43 “learning coaches” — one for each Nunavut school.

“We are increasing funding for instruction, regional school operations, and teacher professional development — an additional $15 million into these three areas,” Peterson said.

They will also spend more on early childhood education: increasing that budget to $7.4 million, an increase of 14 per cent.

That will pay for learning materials to be distributed among Nunavut’s daycare centres.

The government will spend more on safety and security at schools and daycares, following a critical report on the matter from the Auditor General of Canada released in the fall of 2013.

“The Nunavut Teachers Association has joined us to implement proper methods for school safety and training for school staff,” Peterson said.

And in a surprise move, Nunavut Arctic College will work towards becoming a degree-granting university college within three years, Peterson said.

To help pay for that, Arctic College will see its budget rise by five percent to $48 million a year.

Marcel Parungao of Nunavut Arctic College told reporters that the college will upgrade courses in certain programs to meet standards set by the Association of Universities and Colleges of Canada.

The Department of Health will see a budget increase of six per cent, bringing its annual spending up to $317 million in 2015-16.

That will include a 35 per cent increase in funding for mental health and addictions programs, bringing that area’s budget up to $20 million.

Also, the GN will spend $4 million more on community health services, and will act to improve residential care for elders.

The government is getting set to open its new Iqaluit correctional centre — which it still refers to as a “relief structure” — by the end of March.

That’s the big new jail next to the Baffin Correctional Centre and across the road from the Ukkivik building.

“This budget doubles funding for the new structure. Staff have been hired and are now training. They’re preparing to take in prisoners in the next few months,” Peterson said.

And the justice department will also study the cost of renovating the existing BCC facility.

Peterson said the GN’s priority is to find ways of separating maximum security prisoners from the rest of BCC’s inmate population.

Also the Nunavut Housing Corp. will get $20 million to build or acquire more staff housing, money that will be voted in a supplementary appropriation.