Nunavut to spend more this year on health, social assistance 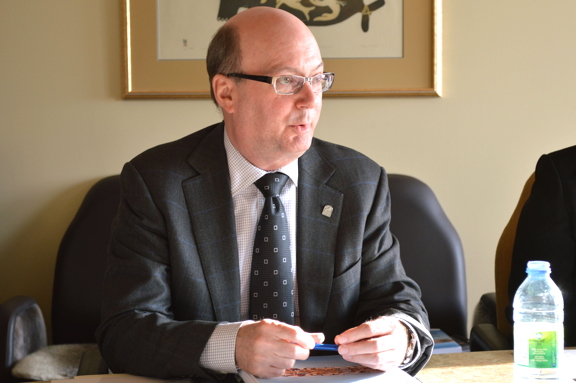 Chris D’Arcy, Nunavut’s deputy minister of finance, answers questions from media during a budget lock-up prior to Finance Minister Keith Peterson’s 2016-17 budget speech in the Nunavut legislature Feb. 25. Peterson said the GN will spend $8 million more on social assistance, a 20 per cent increase that will bring total spending on that program to about $45 million, and create “a fully-funded” suicide prevention action plan. (PHOTO BY STEVE DUCHARME)

Though Nunavut’s economy will grow by only 1.2 per cent during the upcoming fiscal year, the Government of Nunavut plans to spend more on health care and social assistance in 2016-17, Finance Minister Keith Peterson said in his Feb. 25 budget speech.

That social and health spending will include a “new one-year, fully funded action plan” under the GN’s suicide prevention strategy, Peterson said.

But he did not specify exactly how much the new suicide prevention action plan would cost.

Peterson did say, however, that the GN will give the Department of Health $21 million more in 2016-17 for front-line service delivery, an increase of six per cent from 2015-16.

That will include more money for home care and community care, hospitals and doctors, community health centres and medical transportation, Peterson said.

And Peterson said the GN will spend “nearly $5 million” on improving mental health and addictions care and that the GN is “well on its way” to filling all vacant mental health positions in the communities.

At the same time, the territorial government will continue to work on new public health and mental health legislation.

The Department of Family Services will get $13.5 million more next year, a rise of nearly 11 per cent, Peterson said, including $5.5 million for residential care, services to protect children and family violence reduction.

And the GN will spend $8 million more on social assistance, a 20 per cent increase that will bring total spending on that program to about $45 million.

“This will provide more help to the families that need it the most,” Peterson said.

The Department of Education will get a small 1.4 per cent increase to its budget for a total of $205 million including $1.9 million more “to support inclusive education.”

On the issue of a replacement for Cape Dorset’s Peter Pitseolak school, destroyed last year by fire, Chris D’Arcy, the deputy minister of finance, said that may or not be dealt with in one of the supplementary appropriation spending bills the government plans to introduce this session.

“For now, we will be introducing a supplementary appropriation for capital during this session that will encompass any changes that have happened between the approval last fall session and now. You’ll see stuff that happens then, which may include the Cape Dorset school, or not,” D’Arcy said.

Total spending — including capital projects, operation and maintenance, and contingencies — will likely come to $1.73 billion in the upcoming fiscal year, producing a small deficit of $3.9 million, Peterson said.

“The projected deficit, at $3.9 million, represents about one-third of one per cent of our total spending. In other words, it’s very, very small,” Peterson said.

“We’re not looking for major surpluses. We’re always trying to post modest surpluses to show Ottawa that we can manage our money and its important for investors… its important for the Auditor General of Canada that we can actually manage our money, and that’ll play into our benefit as we’re negotiating to devolution,” Peterson said in a budget lockup prior to his speech.

He said that by drawing less on contingency funds, the GN might show a small surplus by March 31, 2017.

And when the GN closes its books for 2015-16, the territorial government expects to produce a small surplus of $16.2 million, a little less than the $23.8 million he forecast in last year’s budget speech.

“We borrow only for capital projects, those infrastructure projects that Nunavut badly needs, like schools, public buildings, and airports. We never borrow to fund our operations and maintenance,” Peterson said.

Other measures highlighted in Peterson’s budget speech include:

• a possible art school for Nunavut, which could possibly be run under Arctic College;

• a “hunter education program” that would emphasize firearms safety and harvesting skills;

• $4 million more for law enforcement, including more money for restorative justice: and,

With files from Steve Ducharme