Nunavut Tourism: 69 per cent of visitors are work travellers, not tourists 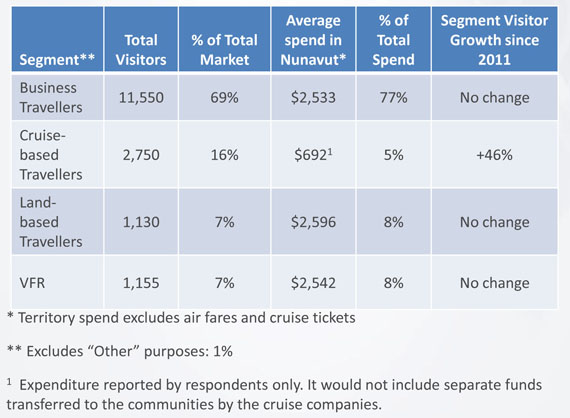 This graph, from Nunavut Tourism’s 2015 visitor’s survey report, shows 69 per cent of visitors to Nunavut are business travellers, not tourists. The biggest growth area is in cruise ship tourism, but cruise visitors spend little money in the territory.

About 16,750 non-residents visited Nunavut between May and October of 2015 — but nearly seven in 10 of those visitors were business travellers, not tourists, a Nunavut Tourism survey has found.

“Business activity is a real mix of government, construction, education, research, mining and meeting attendance. Many are back and forth on a regular basis (four in 10,) most are male, few with family along,” the survey found.

The survey, which Nunavut Tourism released April 21, tries to shine positive light on a bleak picture.

It shows that “land-based travellers” — real tourists who hike, camp, visit sites of interest or stay in hotels and bed-and-breakfast operations — comprised only seven per cent of total visitors to Nunavut in 2015.

Only 1,130 people fell into the land-based traveller category, with each person spending an average of $2,533 in Nunavut — not counting air fares.

Another group, people who travel to visit friends and relatives in Nunavut, or “VFR” visitors, comprise another seven per cent of the total. They spend an average of $2,596 per person in Nunavut — not counting air fares.

Both of those groups were outnumbered in 2015 by cruise ship travellers, 2,750 in all, comprising 16 per cent of the total.

But the cruise ship group spent, on average, only $692 per person in Nunavut.

“While their trips are generally expensive ($17,000 per person on average), the amount left in Nunavut is only $692. This compares to just over $2,500 on average for land-based travellers,” the survey found.

Although they spend little money in Nunavut, cruise ship visitors represent the only growth area for tourism in Nunavut.

And the majority of cruise ship passengers are females aged 65 or older, with advanced university degrees.

Overall, non-resident visitors — with airline tickets and cruise ship fares excluded from the total — spent an estimated $37.88 million in Nunavut in 2015, the survey found.

And it was business travellers who accounted for 77 per cent of that spending.

But at the same time, players in the tourism business could do more to entice these business travellers to spend more money on side trips and souvenirs.

“The survey results reveal a great deal of latent demand for both guided trips and for buying art/carvings/souvenirs. They want better access to guides, as well as a greater range of products available for purchase,” the survey report said.

And the best place for Nunavut Tourism to spend its marketing money is to entice more land-based leisure travellers, who make up only about seven per cent of the total and comprise fewer than 1,200 people.

“This is where most external marketing dollars should be allocated. The key is to tap into the latent demand that exists for visiting Canada’s Far North.”

As for cruise ship travellers, the survey report says the cruise lines should be encouraged to do more sailings and that tourism players should “encourage greater product spending while on land.”

“This involves both marketing materials (e.g. where to find carvers/retailers) and a greater variety of products,” the report said.

At the same time, they said the cruise lines complain of too much red tape when they sail through the Canadian Arctic.

That’s unlikely to change, however, because of growing concerns about the public safety and environmental threats posed by increased cruise ship traffic.

The report found the biggest complaint that visitors have is the cost of air fare and difficulties in finding information and places to buy souvenirs.

The overwhelming majority of visitors — 87 per cent — visit the Qikiqtaaluk region.

Twenty per cent of visitors travel to the Kitikmeot and only eight per cent visit the Kivalliq.

On the other hand, 49 per cent of visitors to the Kitikmeot were leisure travellers, many on cruise ships, and 50 per cent were business travellers.