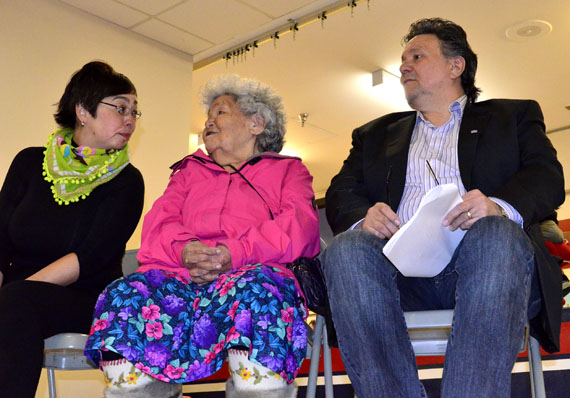 Emcee Karliin Aariak chats with Iqaluit elder Inuapik Sageatok at the May 5 launch of the Nunavut Food Security Strategy and Action Plan, while Premier Peter Taptuna waits for his turn to speak. (PHOTO BY JIM BELL)

In a room filled with the inviting scent of boiled seal meat, fresh bannock and frozen Arctic char, a coalition of Nunavut groups on May 5 unveiled a strategy and action plan aimed at reducing hunger and malnutrition in the territory.

Called the Nunavut Food Security and Action Plan, the food blueprint sets out a long list of tasks — stating who is responsible for doing what and when they are expected to do it.

“A lot of Inuit in the communities are hungry. We have the highest food insecurity in Canada with the highest cost of living,” Okalik Eegeesiak, the president of the Qikiqtani Inuit Association, said at the strategy’s launch in Iqaluit.

The QIA, Nunavut Tunngavik Inc., the Government of Nunavut and a long list of government, quasi-government and private organizations — calling themselves the Nunavut Food Security Coalition — developed the plan over the past two years.

Nunavut helped pay for it with money contributed by Health Canada. One of the highlight events in the process was a food security symposium held January 2013 in Iqaluit.

This activity flows from revelations that began to emerge in 2009, when data from the 2007 Inuit health survey revealed that seven in 10 Nunavut families don’t have enough to eat for at least part of the year.

And food price protests conducted in 2012 by organizers of the Feeding My Family Facebook group helped turn the issue into a matter of political urgency.

Another factor is growing disillusionment with the Nutrition North Canada program, which created public expectations for lower food prices that cannot be met.

“In Nunavut there are food insecurity rates that are eight times higher than the national average,” Nunavut Premier Peter Taptuna said at the launch, which coincides with the first day of National Hunger Awareness Week.

He said also that food security is a priority listed in Sivumut Abluqta, his government’s mandate statement.

In that document, Taptuna said the GN now recognizes that “adequate food is fundamental to the health, education and well-being of Nunavummiut.”

To that end, the food strategy divides its tasks among six broad areas.

They also say they will “explore” the commercialization of country food and look at providing more infrastructure to help hunters store, share or sell their harvests.

And they will look at encouraging the consumption of a wider variety of country food, but also maintain a balance between harvesting and conservation.

The Nunavut Anti-Poverty Secretariat and the Nunavut Bureau of Statistics will maintain a food price survey and begin to develop a Nunavut cost of living survey.

At the same time, Arctic Co-ops Ltd. and the North West Co. promise to expand the range of healthy foods available in their stores and eliminate inefficiencies that creates higher food prices.

The Arviat Wellness Centre and other players will look at food production in other Arctic regions to see what can be used in Nunavut.

In this category, a variety of organizations promise to provide information on budgeting, nutrition and healthy eating.

And they also promise to advocate the reintroduction of home economics classes in high schools.

At the same time, the GN’s education department will work on the development of a healthy living website.

This includes the possible expansion of school breakfast programs and nutritional programs for children.

Coalition members will also advocate for the creation of community food centres for “communal food preparation.”

The Nunavut health department and the Nunavut Development Corp. will work with food retailers to implement the Donation of Food Act and look at revising the Public Health Act to improve food security.

And the GN’s Department of Finance promises to review the tax system, while the Nunavut Housing Corp. will implement recent changes to its public housing rent system.