“Should he resign and run as an independent? Those questions are being asked.” 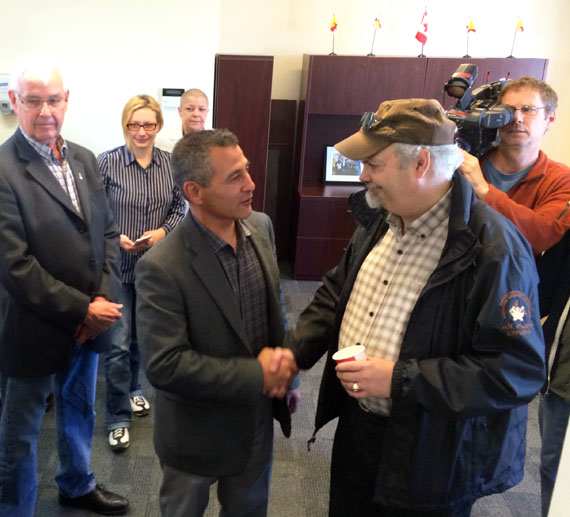 Nunavut MP Hunter Tootoo greets constituents July 27 at an open house in Iqaluit, his first day back to work as MP after he resigned from cabinet and Liberal caucus to take an eight-week leave. Now Nunavummiut say they want more answers about Tootoo’s departure. (PHOTO BY STEVE DUCHARME)

Things were looking pretty good for Nunavut, politically, in the fall of 2015 — almost half of the territory’s voters helped elect a new MP, Hunter Tootoo, a member of Justin Trudeau’s victorious Liberals who was soon appointed to cabinet as minister of Fisheries and Oceans and the Canadian Coast Guard.

Nine months later, Nunavummiut are less enthused and left with unanswered questions about the future quality of their representation in Ottawa.

Tootoo returned to work as MP this past week, eight weeks after resigning from cabinet and the Liberal caucus May 31 to seek addictions treatment.

Constituents welcomed their MP back July 27 at an open house held at Tootoo’s Iqaluit constituency office.

But the news that followed wasn’t good: the same day, the Prime Minister’s office confirmed that Tootoo would not rejoin the Liberal caucus.

“We wish Mr. Tootoo well as he resumes his parliamentary functions as MP for Nunavut. His status with regard to the Liberal caucus remains unchanged,” the PMO said.

The following day, a Globe and Mail story alleged Tootoo parted with the Liberals over an “inappropriate” sexual relationship with a person they described as a junior female staff member.

But Tootoo has remained evasive on both issues.

“If you’re a member of Parliament or in the public forum… when you go through something like this, your constituents have a right to know what happened,” said Jack Anawak, a former Liberal MP for Nunatsiaq and the Nunavut NDP candidate who ran and lost to Tootoo in the 2015 federal election.

“Keeping them in suspense isn’t going to help anyone.”

As someone who once struggled with alcohol dependency, Anawak has sympathized with Tootoo and suggested the MP can still serve the territory as an independent.

But Nunavummiut deserve to know why Tootoo left the Liberal party, Anawak said.

“Something else had to happen to precipitate this step. We’re not that naïve,” he said. “I’ve been in politics — you don’t leave [cabinet] on your own accord.”

Iqaluit Mayor Madeleine Redfern said the city and it residents stand to lose an important ear and voice in Ottawa now that Tootoo will sit as an independent MP.

Like many Nunavummiut, Redfern was happy to see Tootoo elected last fall, and saw the MP’s influence at work almost immediately — regular access to a cabinet minister, funding confirmation for a deep sea port in Iqaluit, a small craft harbour in Pond Inlet, and money for the city’s new aquatic centre.

But since the MP’s departure in May, that’s changed, she said.

“Not having an MP [for a period] and now having one that is dealing with a question of his misconduct…. it makes my job a little more difficult,” Redfern said.

“[Tootoo] had the opportunity to quell those rumours.”

But the MP hasn’t, instead providing the same scripted remarks in a number of media interviews he gave July 27. The MP hasn’t been available to comment on the allegations since.

Redfern said she’s not worried that the Liberal government will back out of other promises it has made to Iqaluit and Nunavut.

“But we have more asks,” Redfern said, citing the need to fund to the city’s new landfill and upgrade its waste water treatment system, along with dealing with aging energy infrastructure across the territory.

If the territorial government is worried that Nunavut’s access to Ottawa has taken hit, they’re not saying much about it.

“The Government of Nunavut maintains good relationships with the federal government and our access to various ministers has not changed,” the GN said in a July 28 statement emailed to Nunatsiaq News.

In a statement issued late in the afternoon July 29, the Nunavut Liberal Association issued a bland statement saying they wish Tootoo well.

“We wish Hunter Tootoo well in his recovery & as an independent MP. We will continue to be a dedicated voice for Liberal values and an active voice for Liberals across Nunavut,” the statement said.

We wish Hunter Tootoo well in his recovery & as an independent MP.
We will continue to be a dedicated voice for Liberal values..1/2

Since his return as MP, Tootoo has said he remains a strong supporter of Justin Trudeau’s Liberal government and will continue to hold them accountable for promises made on the campaign trail last year.

“But some of the people who voted for him are saying ‘We elected a Liberal,’” Anawak pointed out.

“Should he resign and run as an independent? Those questions are being asked.”