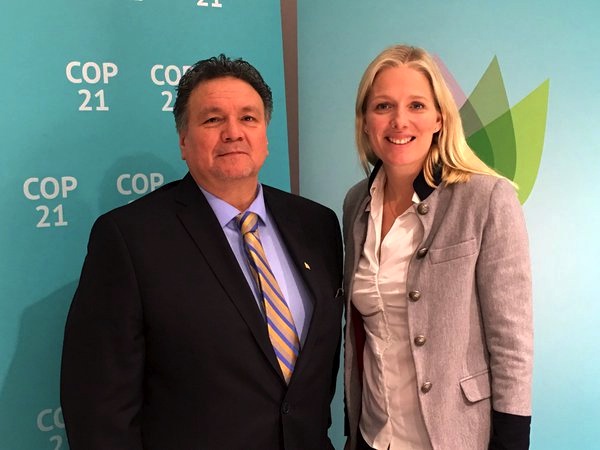 Nunavut Premier Peter Taptuna and the federal environment and climate change minister Catherine McKenna stand together Dec. 7 at the COP21 talks in Paris, which are now entering their second week. (PHOTO COURTESY OF P. TAPTUNA) Soot particles from ship engine exhaust systems, such as this one, fall to the ground in the Arctic where they magnify heat. COP21 will produce a non-binding agreement aimed to reducing soot, also called black carbon. (FILE PHOTO)

As global climate change talks in Paris enter their second — and last — week, the Canadian delegation, which includes representatives from the Government of Nunavut, the Inuit Circumpolar Council and Inuit Tapiriit Kanatami, has geared up its presence.

Nunavut Premier Peter Taptuna said Dec. 6 that he had attended briefings as well as a meeting with other Canadian premiers attending the United Nations Framework on Climate Change meetings. It’s called COP 21, because it’s the 21st time there’s been such “a conference of the parties.”

This week’s “high level” segment will see world leaders and their national delegations trying to agree on a global plan for Dec. 11, when COP21 is supposed to wrap up.

As for that global plan on climate action, a draft produced Dec. 5, did call for the “promotion and fulfillment of human rights for all,” meeting at least one of the goals of the ICC at COP21 is to try to keep the global temperature rise to 2 C above pre-industrial levels — estimated to be two to three times higher in the Arctic.

But Indigenous peoples are mentioned only in the draft plan’s preamble.

The right of Inuit in developed nations to gain access to international adaptation funds remains uncertain, and there is no mention of the Arctic in the 40-plus-page draft agreement.

A Green Freight Action Plan to fight black carbon (soot) and other fine particle pollutants, which would reduce warming in the Arctic, has gained support — but this will be a voluntary effort.

The plan wants to reduce climate-warming emissions, soot and other pollutants in the freight sector by 2025.

Overall, the transportation sector contributes about 22 percent of global emissions and about 19 per cent of emissions of soot — and in the Arctic, soot accounts for as much as 30 per cent of the warming in the region.

The Global Green Freight Action Plan, supported by 50 governments and companies, is now part of the Lima-Paris Action Agenda.

“The world is expecting more than half-measures and incremental approaches. It is calling for a transformative agreement,” UN Secretary-General Ban Ki-moon said Dec. 7 at COP21.

But if COP21 fails to produce that kind of global agreement, the global freight action plan is exactly the kind of “voluntary, multilateral, multi-stakeholder global partnership” that would shoulder the responsibility of curbing climate change.

The Lima-Paris Action Agenda, whose supporters include Canada and the United States and major companies such as Ikea, aims to double the number of countries that are committed to the Green Freight Action Plan by 2018.

Arctic warming could be reduced by roughly half a degree Celsius by 2050 by controlling transportation-linked emissions, the Arctic Council’s Arctic Monitoring and Assessment Programme said Dec. 3.

But that will require global actions to reduce those emissions of soot and co-emitted air pollutants.

The COP21 talks continue until Dec. 11 — and you watch what’s going on in the high-level plenary here.