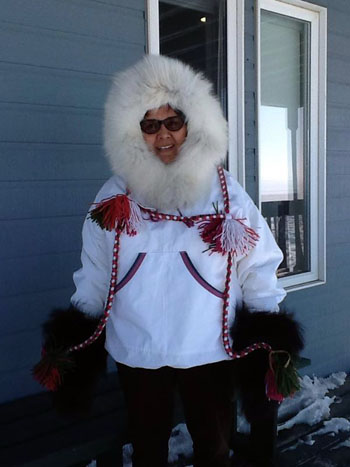 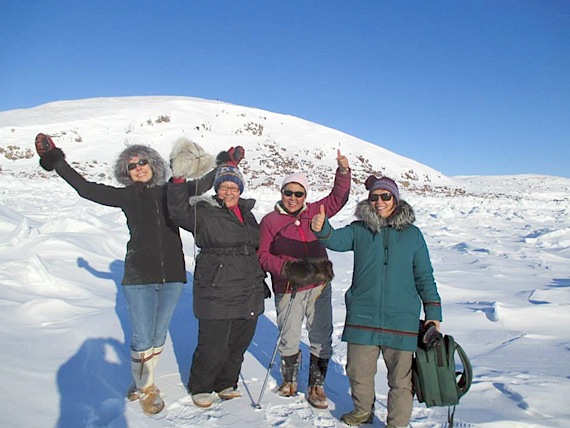 Half of this year’s Women in Action group, from left, Madeleine Cole, Joanna Awa, Edna Elias and Mary Wilman, are pictured here during a training exercise in February. A group of eight women will set off from Hall Beach May 2, with hopes of reaching Igloolik by foot in three days. (PHOTO COURTESY OF JOANNA AWA)

After admiring the women who’ve taken part in past Steps of Hope walks, Iqaluit doctor Madeleine Cole is “delighted” to count herself among this year’s Women in Action.

Cole is one of eight Nunavut women will leave Hall Beach May 2 on foot towards Igloolik, about 70 kilometres away, as part of the 2015 edition of Steps of Hope.

This year marks the third walk, which aims to raise money and awareness for breast cancer.

“I remember reading about the walk and thinking what a fabulous idea is was,” said Cole, who works as a physician out of Iqaluit’s Qikiqtani General Hospital.

“I’ve also read a lot about other Aboriginal groups leading walks for health and political reasons, and I thought ‘Wow, I’d love to do that.’”

Nateela, from Arviat, is a breast cancer survivor, now 13 years from her initial diagnosis.

“What I like about this walk is the focus on cancer prevention,” said Cole, who does her fair share of that as a doctor. “The emphasis on eating well, physical activity, rest, no smoking and being kind to one another.”

“Cancer screening and research are both incredibly important and we need to work at those on many levels.”

The unhealthiest part of the walk will likely be the high-fat brownies Cole plans to bake and pack to sustain the walkers over the three days they estimate it will take them to reach Igloolik.

Cole, who has skied from Iqaluit to Kimmirut and taken part in a two-week expedition near Pond Inlet, has some long-distance travel under her belt.

But this trip will be different, she said, just based on the company.

“It’s different travelling with Nunavummiut,” said Cole, who’s lived in Nunavut for about 12 years. “Partly because of the knowledge they have of the land, but all the food sharing practices and they stories that are shared as you walk.”

Elias, the walk’s founder and leader, said it will be hugely valuable having a doctor join the group this year.

Elias almost had to pull out of the group’s 2014 walk in the Kivalliq after she was diagnosed with a lung disease last year.

“But I’m feeling pretty good,” Elias said. “My lungs are stable and I can do the walk.”

This will be Elias’ last major event in her term as Commissioner of Nunavut, which ends May 11, and she said it’s the perfect way to end her term.

The walk from Hall Beach to Igloolik will be the shortest yet; last year’s stretch from Whale Cove to Rankin Inlet covered about 130 kilometres, which the five-member group managed to finish in three days.

While last year’s Steps of Hope brought in $70,000 for breast cancer research, this year’s Women in Action are aiming for $100,000 — money that will be donated to the Alberta Cancer Foundation.

So far the group has raised roughly $40,000, although “it’s when the walk actually starts that people really start donating,” Elias said.

Donations can be made here.