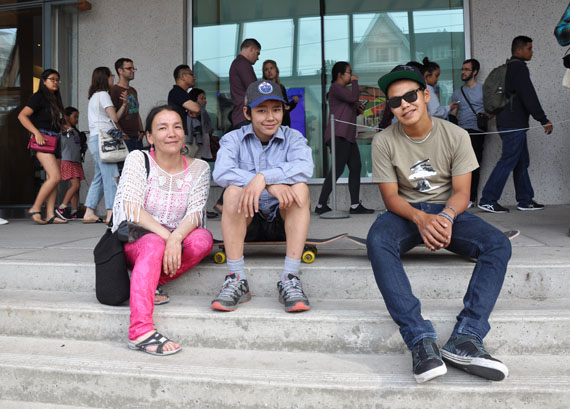 Alasuak Akesuk, her son and artist Latch Akesuk and Parr Josephie pictured outside of the Art Gallery of Ontario June 28 ahead of the opening of an exhibit featuring the work of the two Cape Dorset youth. (PHOTO BY SARAH ROGERS) 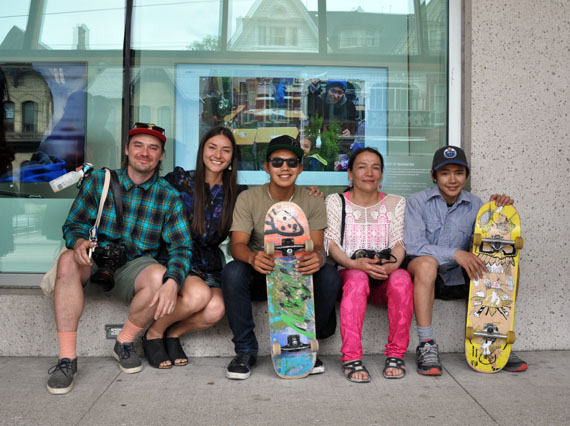 Artists Patrick Thompson, Alexa Hatanaka, Parr Josephie, Alasuak Akesuk and Latch Akesuk sit in front of the Art Gallery of Ontario in Toronto June 28. Behind them, video screens show footage of their group, Embassy of Imagination, and the work behind the group’s public murals. Cape Dorset youth will participate in two new mural projects this summer, in Ottawa and in the home community. (PHOTO BY SARAH ROGERS) 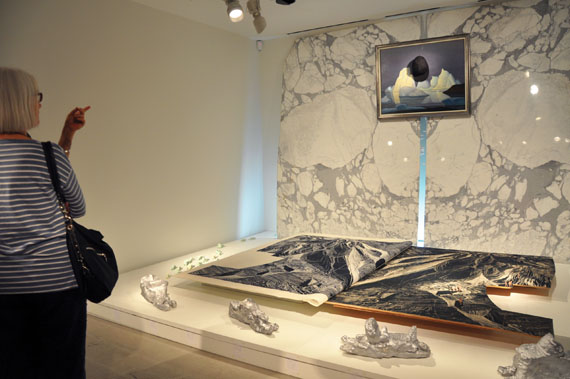 Towards Something New and Beautiful * Future Snowmachines of Kinngait 2017 is one installation in a new exhibit at the Art Gallery of Ontario. It features models of snowmobiles made by Cape Dorset youth, cast from metal scavenged from the remains of Peter Pitseolak school. (PHOTO BY SARAH ROGERS)

TORONTO—As a line-up forms outside the Art Gallery of Ontario, Lachaolasie Akesuk takes advantage of the city’s concrete sidewalks to pull out his skateboard.

There aren’t many places for the 16-year-old to skateboard at home in Cape Dorset, with its long winters and dusty summers, but Toronto’s urban landscape makes the perfect playground.

Akesuk didn’t come all this way to skateboard though; the sprawling gallery he rides around features some of the young artist’s work.

Akesuk and his mom, Alusuak Akesuk, are here for the June 28 opening of the AGO’s new exhibit for Canada’s 150th anniversary, called Every.Now.Then: Reframing Nationhood.

How does the teen feel about seeing his work exhibited at one of the country’s largest art museums? “Not bad,” he says. “I’m pretty happy.”

Cape Dorset youth have collaborated with the Toronto-based PA System, artists Patrick Thompson and Alexa Hatanaka, on a number of art projects under the name Embassy of Imagination, including murals, photography and print-making.

This exhibit features something a little more unusual: Akesuk and other Cape Dorset youth—Moe Kelly, David Pudlat, Christine Adamie and Nathan Adla— crafted snowmachines made out of playdough.

The group scanned the machines, printed them out in 3D and created moulds. Then they took old aluminum from the remains of Peter Pitseolak school, destroyed in a 2015 fire, and cast new snowmobiles from the metal.

Both the playdough and metal versions of the snowmobiles are on display in the exhibit, surrounding pieces of linoleum flooring salvaged from the school. Hatanaka and Thompson used the flooring to create a huge linoprint evoking snowdrifts and Arctic sea ice.

“The loss of the school was a tragedy that has been hard on the whole community,” said Hatanaka.

“It felt important that the youth participate in reclaiming that negative event, which continues to impact their lives, and imagine a brighter reality through transforming the material, using their creativity to enact tangible change for themselves and their peers.”

Editions of the snowmachines will go on sale through the AGO, with proceeds going towards a elders-lead land camp for Cape Dorset youth.

The multimedia installation aims to span the country’s wide range of cultural, spiritual and land-based stories, to illustrate not only a nation’s history, but also its future.

Hatanaka said Canada 150 marks a critical time for Canadians to acknowledge the voices and expression of youth like the Cape Dorset artists involved in the installation.

“It is so important that people down south be prompted to learn about the North and recognize the importance of these young voices,” Hatanaka said.

Outside the gallery, a video screen plays footage of the Embassy of Imagination’s other ongoing project: murals, which the group has already painted on buildings in Toronto and Montreal.

The group is scheduled to produce two more murals this summer; one in Ottawa in July and another at home in Cape Dorset later this summer.

Parr Josephie, an 18-year-old Cape Dorset artist and now a veteran member of the Embassy of Imagination team, will serve as a mentor to other young Inuit artists working on the project.

“What I’ve learned is, if you work hard, you can get something amazing at the end,” Josephie said.