Nunavut youth gets certified for lifeguard duty in CamBay

“It would be a great summer job before college” 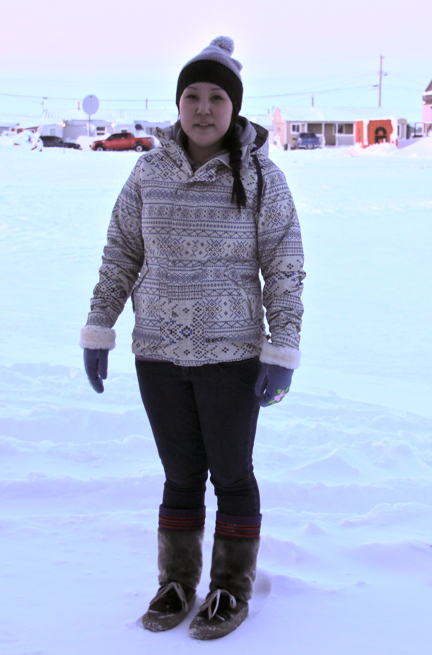 Candace Elatiak, 21, swam competitively for years and is excited about getting her lifeguard certification. (PHOTO BY KELCEY WRIGHT)

CAMBRIDGE BAY — Every summer, the Hamlet of Cambridge Bay has to fly someone in to work as a lifeguard at their popular indoor pool.

But this year, the hamlet can actually hire someone locally.

Candace Elatiak, 21, will be only the second local lifeguard to work at the pool as a summer job.

“I think it’ll be fun,” said Elatiak, who moved back to Cambridge Bay in 2010 after living in Yellowknife for a few years. “I’ve been thinking of becoming a lifeguard for a long time. It would be a great summer job before college.”

In previous years, the hamlet has had to find lifeguards in the South and pay for them to come north to work at the pool. But this year, they are flying Elatiak to Yellowknife instead to get her properly certified.

“In April, I will be taking my gold medallion course to learn to be a lifeguard,” said Elatiak. That should take about two weeks.

But swimming isn’t new to Elatiak.

She grew up in Yellowknife where her foster mother enrolled her in swimming lessons when she was in Grade 7. She’s been swimming competitively ever since.

“I like racing,” she said. “My foster mom thought that you should be active, so she put me in swimming and then I was in competitive swimming for a long while.”

In 2005, Elatiak attended the North American Indigenous Games in British Columbia where she won a gold medal in the two-kilometre butterfly stroke.

Now, the Grade 12 student who holds two jobs — one with the Hamlet of Cambridge Bay and one with the 4dNorth group home — is ready to take on a new challenge.

After being a pool attendant last year at the Cambridge Bay facility, Elatiak is proud to be moving to a position with more responsibility and authority.

“I can’t wait to gain a new experience,” she said. “My favourite part of last summer was hanging out with the lifeguards. They taught me lots of tips and whatnot.”

In fact, when lifeguards gave her a few tests last summer, they were impressed with her skills and suggested the recreation committee send her out to get qualified.

Although her last competitive race was in 2009, she can’t wait to get back in the water.

“I’m excited to get a summer job where I could maybe save a life,” said Elatiak, who is hoping to study social work at college one day.

Until then, Elatiak will be working hard to complete her courses and finally become the lifeguard she’s always wanted to be.

“It’s going to be really cool,” she said. “Hopefully it’ll get other kids interested in swimming too.”