Isacci Shaa, 10, stands under the mural created by local youth, with the help of the Embassy of Imagination, and installed this winter in two parts on two outside walls of the Cape Dorset elementary school. (PHOTO COURTESY OF EMBASSY OF IMAGINATION) 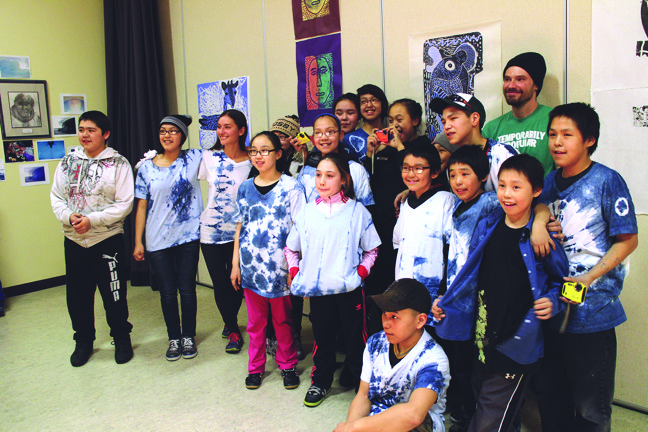 Cape Dorset youth who participated in an art show last March pose in front of their artwork. Over 60 per cent of the artwork was sold during the show and online. (PHOTO COURTESY OF EMBASSY OF IMAGINATION)

A two-storey mural to be painted this summer in downtown Toronto by eight youth, including four from Cape Dorset, may include a one-of-a-kind Nunavut image: an Inuk grandfather carrying a broken-down snowmobile on his back through the streets of Cape Dorset.

Like many famous images depicted in art, this one comes with a good story: the man carrying the snowmobile is the grandfather of one of the mural artists — 16-year-old Parr Etidloie.

Etidloie thought it was such a good story — a man carrying a defunct snowmobile to the repair shop — that he immortalized it in art.

“We incorporated Parr’s grandfather carrying the snowmobile in the sketch, but on top of the snowmobile we drew almost every animal in the North,” said Patrick Thompson, one of the organizers of the Toronto mural project.

Thompson, along with Alexa Hatanaka, have organized art projects for Nunavut youth through their Embassy of Imagination arts initiative for nearly 10 years, including the last couple of years in Cape Dorset.

Most of the Cape Dorset projects came together during an after-school drop-in arts workshop that has produced, among other things, colourful wildlife-proof recycling bins, an enormous two-part mural installed this winter on two outside walls of the local elementary school and an art exhibition this past March, where more than 60 per cent of the artwork was sold.

But in Toronto this summer, the four Cape Dorset youth — Etidloie, Audi Qinnuayuaq, Latch Akesuk, and Cie Taqiasaq — will get a chance to visit galleries and see other youth-led art initiatives, Thompson said.

“They don’t understand the power they have in the world as artists, and as kids whose lives could go in so many different directions. We want to get them excited about living art, and what it can do, and how it can connect people,” he said.

Thompson said the final image for the downtown Toronto mural, to be painted over three weeks in July at the intersection of King and Jarvis streets, has not been finalized. That will only happen after the youth meet each other and begin working together.

But the young Nunavut artists were told to prepare by coming up with ideas and doodling on paper.

“Maybe they think their doodles aren’t that special, but they can actually have a huge impact,” Hatanaka said in a May 22 interview.

“And when they do this mural in Toronto, it’s going to be larger-than-life. To have that public voice in the public realm, and leave a statement up for years — I think that may really resonate with them.”

And Thompson and Hatanaka are using art to get through to kids who might otherwise be hard to reach.

“Kids who are grounded or suspended from school — we refused to send them away from our after-school workshops,” Hatanaka said.

“I think what a lot of kids were craving was an outlet for fun and making stuff.”

“Even just working with them for two years we’ve seen a change in the kids, in their openness to us and willingness to experiment in front of their friends,” Thompson added.

“We challenge the kids to play.”

And the pair might even have an artistic solution for Nunavut’s recycling woes.

This winter they brought up a small jewellery kiln to Cape Dorset, melted used pop cans, carved soapstone moulds and, with the youth, forged aluminum rings.

“To send soapstone carvings down south is fine, but how amazing would it be if you could actually melt down all the consumed pop cans into sculptures, and make multiple copies of sculptures? It may challenge tradition, but it also speaks to a reality,” Thompson said.

With the rich and longstanding history of artistic expression in Cape Dorset, Hatanaka said local youth are lucky.

“You don’t have to mine the land around Cape Dorset, you only have to mine your imagination. About 40 per cent of locals make money off art,” she said.

The Toronto mural project coincides with the Pan American Games, a massive international sporting event hosted this year by Toronto — a fact that Hatanaka hopes will draw more attention to the youth arts initiative.

The mural project is sponsored, in part, by the Nunavut Arts and Crafts Association which has sponsored other mural projects with Nunavut youth in the past. The project is also sponsored by Canada Council for the Arts, Canadian Heritage and Street ARToronto.

Next year, the pair plan to return to Cape Dorset to continue jewellery-making work with youth. And an exchange program with the Toronto District School Board will see 16 local youth sent to Toronto to work with a student-run skateboard design business. 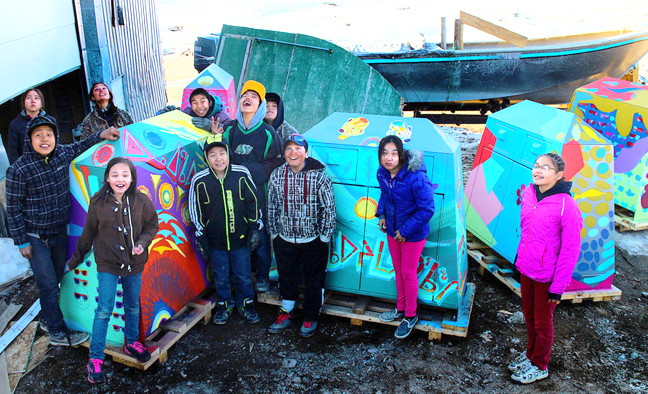 Cape Dorset kids pose with the wildlife-proof recycling bins they helped decorate in 2014. The bins were a project by the Embassy of Imagination arts initiative which has held after-school, drop-in art workshops in Cape Dorset for the past two years. (PHOTO COURTESY OF EMBASSY OF IMAGINATION)