Nunavut youth in Ottawa give thumbs down to uranium mine

“I feel like our territory is in very good hands” 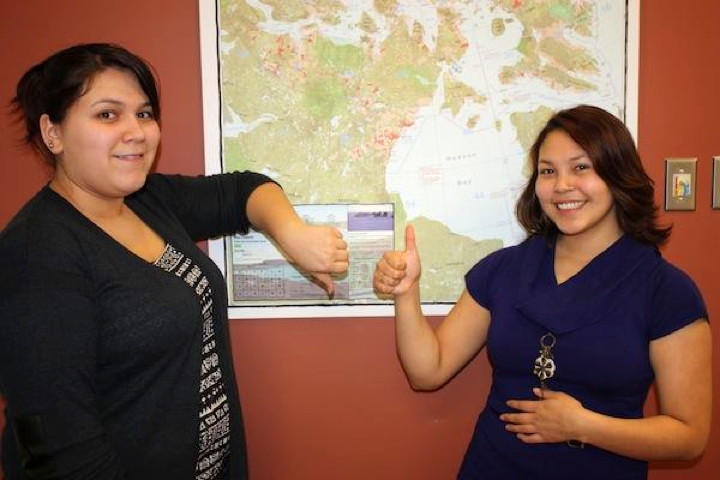 Nicole Hachey, left, from Baker Lake, gave the Kiggavik uranium mine a thumb’s down but Igloolik’s Uliipika Irngaut, gave it a thumb’s up during a debate Dec. 13 over the proposed mine at Nunavut Sivuniksavut in Ottawa, where the two women are attending post-secondary school. (PHOTO COURTESY OF NS)

OTTAWA — After a passionate debate last week over whether Nunavut should allow a uranium mine to go forward west of Baker Lake, students at the Ottawa-based Nunavut Sivuniksavut program decided that no, it isn’t worth it.

Some emphasized the need for jobs and economic growth while mitigating impacts on the environment. Others argued the marine and terrestrial environment are too vital to the Kivalliq’s future to be threatened by uranium mining.

In the end, they seemed to side with people like Nicole Hachey from Baker Lake.

“I don’t think the mine should go ahead,” said Hachey, 18, during a conference call from the NS school in downtown Ottawa Dec. 13.

“There is already a gold mine operating now and it’s going good and it’s given people jobs and opportunities, but it’s also increased the alcohol and drug rates in the community and it’s hurting families.”

She said people are also concerned about caribou migration through the area, and worry that another mine will entice people to drop out of school and work menial jobs at the mine, creating short-sighted dependency on jobs that won’t last.

Areva Resources is in the final stages of approval for Nunavut’s first uranium mine, about 80 kilometres west of Baker Lake.

The potential mine, estimated to hold about 51,000 tonnes of uranium, would be located at two sites, Kiggavik and Sissons, and it would include a total of four open-pit mines, an underground mine and a processing mill.

Proposed infrastructure would consist of a landing strip, worker accommodation, access roads to Baker Lake and between the two sites, and a dock and storage facility at Baker Lake.

Acting as members of the NIRB, students had to read through all the background documents and public comments submitted to the NIRB so far as well as the Areva Resources proposal, said NS instructor Dan Guay.

“It’s very complicated stuff,” Guay said. “I have the highest regard for our students, but I was amazed that they met this challenge head on and ran with it.”

Each student then had to make a speech explaining what side they were on and why.

Because of the number of students enrolled in NS, the class is split into two. Guay said a majority of students in both classes were against the mine.

Two women who disagreed with the majority, and supported the mine, were Marley Dunkers and Uliipika Irngaut.

Dunkers pointed to the huge high school drop-out rate in the territory and the number of Nunavummuit on welfare.

She said so long as Inuit require Areva to adhere to strict mitigation plans and then monitor the outcomes, there’s no reason Nunavut can’t benefit from the jobs and prosperity that would come from the mine.

“I think it should go ahead with conditions,” said Dunkers, 20. “We’re learning a lot about the land claims here at NS. We’re learning about what we should do to figure out a plan for the future. If we make a proper safety plan, and talked about it with elders and community members, we can discuss proper mitigation.”

Irngaut, 18, agreed. “I believe it’s good because obviously there aren’t a lot of jobs available and that’s always a problem in Nunavut,” she said.

“Two weeks on, two weeks off, is perfect. You get to spend time with your kids and your family and then you work for two weeks, make money for your family.”

But Dunkers and Irngaut stressed that wildlife and environmental concerns would have to be addressed before they would support the mine.

Dunkers said she appreciated the opportunity to speak her mind and be honest without fear of being belittled or criticized. She said too often, youth are told to speak up but then their voices are ignored.

“Everyone always says youth are tomorrow,” Irngaut added, to punctuate the thought. “But youth are today. We are here today.”

Guay said the big lesson he wanted students to take away was that, sure, these decisions are complex, multi-faceted and filled with emotion but back in the 1970s, Ottawa or Yellowknife would have decided what to do whereas now, it’s up to Inuit to decide their own fate.

And if NS students are any indication, the future is bright.

“It gave me a lot of hope for the future of Nunavut. Our northern youth are so smart and just seeing these guys in action through our debate just re-emphasized that for me, just how capable our young people are,” he said.

“Whatever they decide in the future, whether it’s uranium mining or something else, I feel like our territory is in very good hands.”