But that’s something Christine Wilson of Ontario came to understand fairly quickly as a student at Nunavut Arctic College’s Environmental Technology Program, described as an “adventure in learning.”

Last year, as part of a field camp, Wilson was forced to deal with -40 weather by program coordinator Jason Carpenter.

“We do one night of survival where we just drive out with Jason and he says, ‘Okay, your skidoos broken now. You can only use the supplies you have with you,’” Wilson explains.

Those supplies included little more than a few basic tools for cutting blocks of snow to make an igloo, a camp stove, and a sleeping bag.

And many of these graduates, about 75, are expected back in Iqaluit to celebrate the program’s 25th anniversary Nov. 30, with an open house and reunion banquet.

Carpenter also graduated from the program in 1996, but now he runs the show — and has a pretty good sense of the right people to admit to the program.

Once accepted, they can look forward to joining the long list of graduates that have gone onto help guide Nunavut’s environmental future.

“One of the things I ask people when I call them is… do you see yourself sitting in a cubicle for the next 20 or 30 years? Or do you want a career that, during the summer months, will get you out on the land?” Carpenter said.

Many Nunavummiut are eager to take that route — Carpenter gets upwards of 40 applicants a year, yet only 16 make the cut.

Many graduates hold important positions in companies and governments.

Carpenter lists them off from his office computer.

But nothing better defines the program, and Carpenter’s enthusiasm for the program, than an old yellow Post-It note on his wall.

The blue ink has faded through time, but the message is still visible — it says, “Nunavut’s problems will not be solved by printing cheap diplomas but rather by hard work.”

This mantra has seemed to serve graduate Andrew Keim well.

Keim graduated from the program in 1994, when it was a three-year program, not two.

Keim thinks that if the Environmental Technology program had never existed, Nunavut would look a lot different today.

“It is the graduates who have stayed north and made such great and valuable contributions to Nunavut and the north in general that really reflect the value and worth of the program,” Keim said.

Supporting the program should be a priority “so we strengthen our own house and the foundations of our future,” he said.

Overall, the future looks bright for the program.

“Not only are we getting more applicants, we’re getting stronger applicants,” Carpenter said.

After they graduate and start at one of the many internships offered around Nunavut, employers rave about the students.

And they’re not just being nice, either, explains Carpenter.

“The proof is in the pudding. If we were producing crap, AANDC wouldn’t have hired four of our students last summer,” said Carpenter.

If you’d like to learn more about the Environmental Technology Program, past and present, you can come to the 25th anniversary open house, planned for Nov. 30 from 1 p.m. to 5 p.m. at Bldg. 959B. 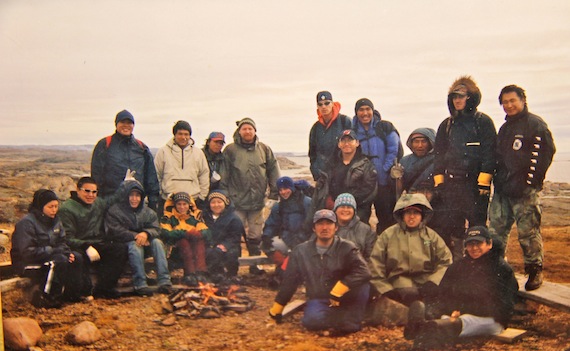 Here’s a look at Jason Carpenter’s first class after he became an instructor at the Environmental Tech program in 2002.