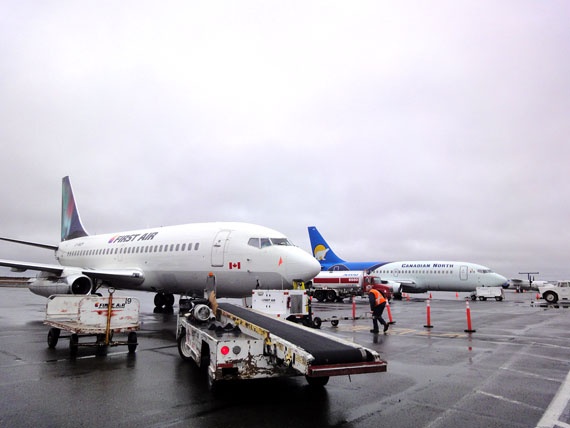 Nunavut is too small a market to support two competing airlines. But, to protect consumers, a single, dominant carrier should be accompanied by a credible system of price regulation. (FILE PHOTO)This editorial was originally published in November 2016. We’ve decided to share it with our readers once again, in light of the new merger talks between First Air and Canadian North.

There’s no doubt about it. The people of Nunavut hate their airlines with a venomous passion.

With the possible exception of the two territorial retail chains, no business group generates more resentment and hostility. In Nunavut, the people love their airlines about as well as a lake trout loves a lamprey eel.

This animosity existed long before Canadian North and First Air began fumbling their way in and out of talks in 2014 aimed at merging their money-losing operations, a process that would—in effect—have created an unregulated airline monopoly throughout most of Nunavut and much of the Northwest Territories.

But that, and the real monopoly they created in 2015 through a series of codeshare agreements that included Calm Air, intensified public distrust. Their executives pretended codeshare wasn’t simply another way of creating the monopoly they failed to create by merging, but they fooled no one.

The ensuing furor, inflamed by tales of stranded medical travel patients and botched air cargo shipments, spilled into Iqaluit City Council, onto the agendas of Nunavut’s regional Inuit associations and onto the floor of the Nunavut legislature.

When this made the news earlier this month, First Air and Canadian North suddenly found their respective brands associated with such septic terms as “predatory pricing” and “alleged anti-competitive conduct.” With big contracts coming up for renewal, such as medical travel, that’s not good for business.

So it’s not such a great surprise that First Air chose to stick a knife into Canadian North’s back last week: a unilateral withdrawal from codeshare, a move in which First Air has summarily booted its erstwhile buddy back into the dark cold night.

Consider, for a moment, the veiled insult that First Air boss Brock Friesen threw at Canadian North within the company’s announcement: “our customers have told us that they strongly prefer to fly First Air on its own.” In other words, First Air believes Canadian North needs codeshare far more than First Air needs it.

So will this purported return to competition create some relief for Nunavut’s unhappy air travellers and air freight customers?

We’re not experts, but as far as we can tell, that’s unlikely. There is no one who matters less to northern airlines than the individual air traveller who uses his or her own money to pay for plane tickets or air freight shipments.

In Nunavut, when airlines “compete,” it’s not the individual consumer’s business they’re competing for. The customers who matter most to them are governments and large businesses.

One of the biggest contracts they compete for is medical travel, under which the Government of Nunavut’s health department buys tickets for more than 30,000 medical trips each year.

That’s the contract most likely to determine how many planes fly in and out of each community and how often. Other big contracts include the freight deals that each airline negotiates with companies like North West Co. and Arctic Co-ops Ltd., whose food freight costs, are, of course, partially subsidized by Nutrition North Canada.

These big players—government and business—have learned how to play the two airlines against each other, striking good prices for themselves that have left the airlines with shrinking revenues and balance sheets written mostly in red ink. In the case of medical travel, contract requirements force airlines, in many cases, to fly in and out of communities at a loss.

This form of competition may deliver benefits to government and large business in the form of cost savings—but it doesn’t do much to reduce costs for you. And right now, none of the players, including government, care much about that.

The airlines, however, did get one thing right and that’s the idea that only a monopoly can survive financially in northern Canada’s small, fragile airline market.

Nunavut, even combined with adjacent regions in northern Canada, is too small a market to support two competing airlines. Although we’ll never get access to their privately-held financial statements, Canadian North and First Air, by their own admission, have lost money, year after year after year. For them, forming a monopoly was the right answer.

But there’s one big problem. Since the early 1990s, Canada’s system for regulating airlines hasn’t offered much price protection to consumers. It’s a system built on the assumption that competition, not regulation, is enough to protect consumers.

In northern Canada, this deregulated system has failed. Without effective, trustworthy price regulation, such as that imposed on cable TV, telecom providers and power utilities, northern consumers will never accept an airline monopoly.

This means a new policy solution for northern Canada. First, encourage the emergence of a single dominant carrier. Second, ensure it operates under a credible system of price regulation.

Once that’s done, the federal government can then ponder a type of policy that’s common in many other places, including Alaska, Australia and Europe, but not practiced in Canada: subsidies for high-cost, low volume airline routes in remote regions.

In today’s climate, none of this is likely to happen. Are there better ideas? We don’t know. But one thing’s certain. The status quo is a failed option. JB