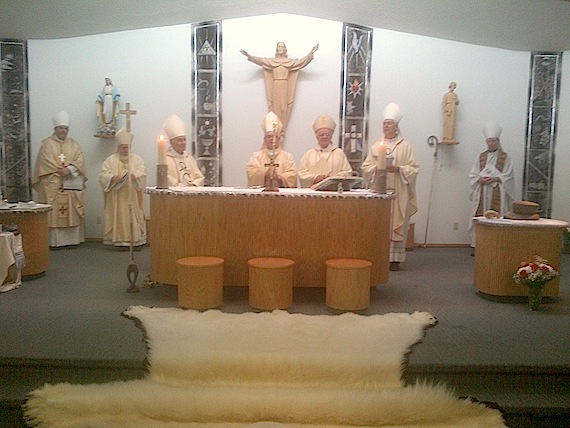 A Roman Catholic ordination ceremony full of ritual in Rankin Inlet as Father Anthony Wieslaw Krótki succeeds Reynald Rouleau as Bishop of Churchill-Hudson Bay on May 30. (PHOTO BY VICKI AITAOK) 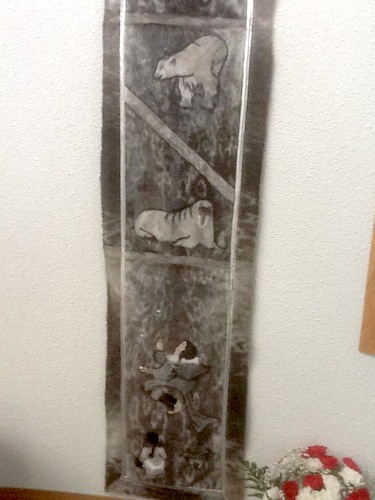 May 30 brought unprecedented pomp and ceremony to Rankin Inlet, when Nunavut’s next Roman Catholic Bishop took on his duties in an ordination ceremony that drew Catholics from throughout Canada and abroad.

The ceremony took place in a midday from 11 a.m. to 2:30 p.m., which packed more than 500 people into Rankin Inlet’s Mary Our Mother church, according to Fabienne Theytaz, pastoral assistant at the church. Community members prepared the church for the ceremony with a new décor, including elaborate sealskin banners behind the altar decorated with traditional and Christian symbols, and traditional carvings for the altar.

Faithful also showed their support for the new bishop with gift offerings for the church, including works of art made from whale bone, caribou antler and stone.

“It was just fantastic, the reaction — not only of the parishioners, but the whole community,” Theytaz said May 31. “I’m very moved and touched by the welcoming of this event here in the community, and the support and kindness and generosity of the people.”

In addition to regular church-goers who usually attend mass in the largely Catholic community, the ceremony hosted bishops from throughout the country, including dignitaries from as faraway as Poland, Krótki’s birthplace.

Krótki, 48, was ordained as a priest in his native Poland in 1990, and first came to Canada that year to serve in Manitoba. He served as pastor in Igloolik from 2001 until his Pope Benedict named him bishop earlier this year. As bishop, he will take up the work of Rouleau at the Churchill-Hudson Bay diocese head office in Churchill, Manitoba.

Krótki will spend about half his time travelling throughout Nunavut, according to Rouleau, visiting the 16 communities where the Catholic church has a base.

Parishioners say he will now be called Bishop Tony, a step up from “Father Tony,” as he has been known throughout Nunavut over the past 22 years. Among Inuktitut speakers, he has now earned the designation “Ataatatsiaraluk,” or “great-grandfather,” rather than Ataata, “father.”

“It was a real moment of pride for Rankin Inlet, and for our Catholic community here,” said Adriana Kusugak, 31, who attended the ceremony with her mother-in-law. “To showcase our church, our people and our faith.”

Kusugak, like many in the community, contributed to the community feast at the community hall after the service, where residents, visitors and dignitaries alike celebrated over traditional food from the land, and cooked meals and baked goods from the kitchens of community members, Catholic and non-Catholic alike.