Daughter’s roadtrip “Are we there yet?” inspiration for Akilak’s Adventure 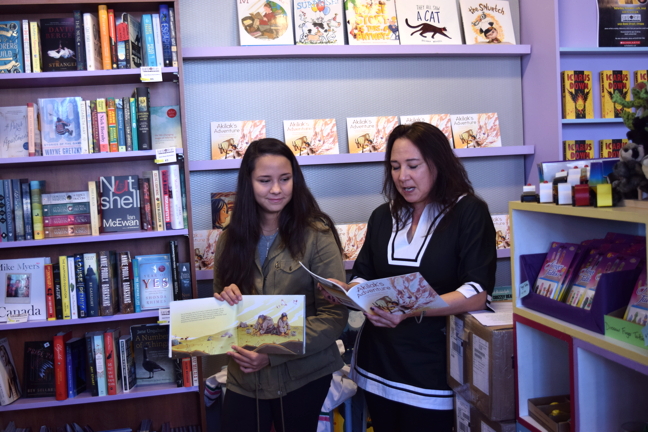 Author Deborah Kigjugalik Webster reads from her new children’s book Akilak’s Adventure with her daughter Nicole helping out at Kaleidoscope Books in Ottawa, the location of Webster’s Nov. 13 book launch. A younger Nicole was the inspiration for the story’s main character Akilak. (PHOTO BY COURTNEY EDGAR)

Two minutes into the drive, just past the Yellowknife airport, her daughter Nicole Amaruq, who was five at the time, asked the inevitable: “Are we there yet?”

Webster says it’s a question asked by children around the world and thus a fitting theme for a new illustrated children’s book Akilak’s Adventure, published by Inhabit Media and launched Nov. 13 at Kaleidoscope Books in Ottawa.

“Inuit have a term called ‘taulittuq,’” she said, “which means the experience of moving but without the sense of nearing one’s destination.”

Webster says her daughter Nicole must have been experiencing taulittuq during that long drive, and she served as an inspiration for her main character, Akilak. Nicole’s vivid imagination and sense of wonderment is evident throughout the story, she said.

Akilak’s Adventure, illustrated by Charlene Chua, tells the story of a girl who goes on a journey when her grandmother hurts her ankle. With only a small piece of dried meat, she sets off to walk to her uncle’s house in Baker Lake, the area where Webster grew up.

During her adventure, Akilak befriends a caribou and through her interactions with the animal, her imagination takes flight. Webster weaves in Inuit traditions and legends with each turn of the page and each step of Akilak’s journey.

“It is fictional,” Webster said of her new book, “but it is so real to me it almost seems true. As a heritage researcher, it is important to me that my work is culturally authentic.”

“It gives our children a role model,” Thompson says, “to write on their own.”

She recalled how when she was a child growing up in Coral Harbour, the books she read in school were about Dick and Jane, featuring animals like pigs and cows which she had never seen before in her town. She laughed as she described how the books she read were full of trees—she’d never seen one of those either.

“And every tree had an apple,” she said about the books. “I thought all trees had one apple.”

Inuit children need to see and identify with the landscape and the animals that are part of their everyday world, Thompson said, which is why books such as Akilak’s Adventure are important.

“It also teaches a respect for elders,” Thompson said. “To do things for their grandparents if they can’t do it.”

She described Akilak’s Adventure as a peaceful book. “It makes you want to go back to live on the land,” Thompson said.

Although Webster has written and published various papers in academic periodicals, magazines and newspapers, as well as one heritage book called Harvaqtuurmit Heritage: The Heritage of the Inuit of the Lower Kazan River, this was her first foray into writing fiction for children.

She is now working on another non-fiction book for adults about Inuit RCMP Special Constables from Nunavut.

Akilak’s Adventure is currently available in English but Inhabit Media says an Inuktitut version, translated by Sadie Hill, who shares Webster’s Baker Lake Inuktitut dialect, will be available by March 2017.