Nunavut’s internet lags behind the rest of Canada: CRTC

Most people in Nunavut won’t be surprised to learn that the territory’s access to Internet is among the worst in the country — and its speed remains five or more times slower than in the rest of Canada.

A November report from the Canadian Radio-Television and Telecommunications Commission tells exactly how far Nunavut lags behind other territories and provinces.

Nunavut has the lowest access to high-speed broadband Internet anywhere in Canada — with only 27 per cent coverage.

More telling are the second-lowest percentages in Canada, which are much higher that Nunavut’s: Manitoba and the Northwest Territories both have 89 per cent accessibility to broadband Internet.

People living in Yukon and in the rest of the county have between 99 and 100 per cent accessibility, according to CRTC data collected in 2010.

Nunavut also remains the only jurisdiction in the country with no access to cable modem broadband Internet access, which is available to 82 per cent of Canadian households.

Nunavut also lacks access to mobile broadband Internet, that is wireless, high-speed Internet access through a portable modem, cell phone or other mobile device — available to 96 per cent of the country’s households.

And Nunavut lacks access to fixed wireless broadband, a type of high-speed Internet access where connections to service providers use radio signals rather than cables.

In general, the CRTC found that 98 per cent of Canadian households — or 10.4 million users — had some kind of access to high-speed broadband Internet in 2010.

In its November report, the CRTC said launching broadband Internet access services, even in rural and remote areas, “should continue to rely on market forces and targeted government funding, an approach that encourages public/private partnerships.”

But the commission also acknowledged that the Internet has become an important means of communication — no less for users in remote and rural Canada.

That’s why the CRTC moved to set universal target speeds for broadband Internet access for all Canadians as part of its telecommunications regulatory policy update last May.

The commission established target speeds of five megabits per second download speeds and one megabit per second for uploads, which should be available to all Canadians by 2015. 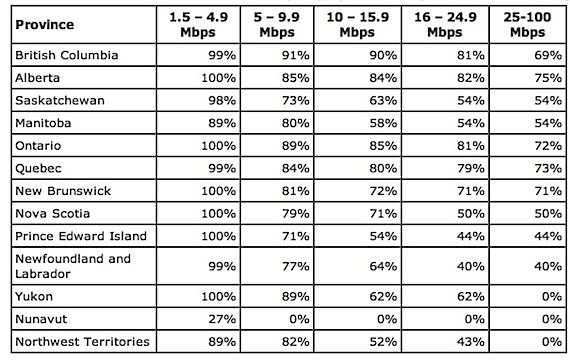 In this graph taken from the November report on broadband access and speed in Canada, you can see how poorly Nunavut ranks.