Champions of the Inuit language to be named next month 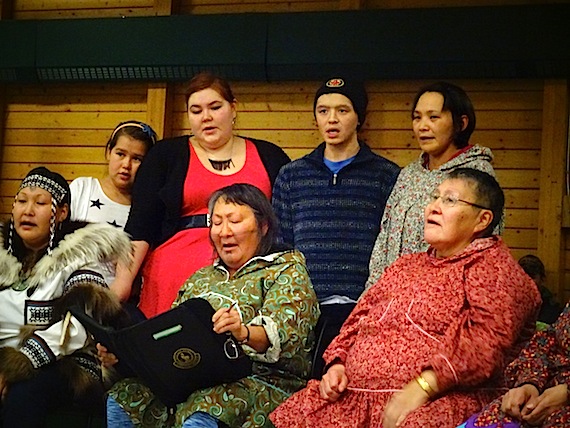 Kitikmeot Inuit Association program co-ordinators Julia Ogina (bottom, second from left) and Sarah Jancke (top, second from left) sing at KIA’s community feast. Every year the Inuit language authority recognizes efforts to preserve and promote the language—but recipients must be nominated to be considered for an award. (PHOTO BY JANE GEORGE)

If you know someone dedicated to keeping the Inuit language alive, you can nominate them for the award, which will be presented next month by Inuit Uqausinginnik Taguusiliuqtiit, an independent agency under the Department of Culture and Heritage.

The Inuit Language Award recognizes Nunavummiut who have demonstrated a high level of commitment to protecting and promoting Inuktitut or Inuinnaqtun, according to a news release.

Nominees will be judged according to:

• The impact on the use of the Inuit language

• The number of communities impacted

• The creativity or innovation behind Inuit language initiatives

Individuals nominated must be Nunavut residents. Organizations may also be nominated. That includes departments or agencies of the governments of Nunavut, municipalities, businesses, and non-profit organizations—including charities, Inuit and land claims organizations, schools and district education authorities, unions and life-long language promoters.